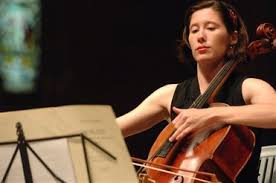 All the connections in this slight playlet (which strangely included an interval) were conducted over the phone.   One of the entertainment’s two main forces, Leah Filley played a young cello-playing musician who talks with various acquaintances and family after her return from study overseas as she attempts to carve out a career in Australia.

Punctuating these generally one-sided phone conversations, Josephine Vains supplied a more physical connection on the set.   Her role was to provide interludes in the form of movements from each of the Bach Cello Suites – the Prelude to No. 1, Allemande to No. 2, all the way through to the Gigue concluding the final D Major opus.   Vains played from the organ loft above the Richmond Uniting Church’s altar wall; in an all-wood building, her projection was excellent, each note telling and vivid.   Pace Filley’s efforts, these musical breaks gave the evening most of its emotional colour and interest.

The trouble with Suite Life  –  second in a series of three productions in this Connections series  –  lies in its all-too-predictable dialogue/monologue.   The cello-playing musician wakes to a phone-call from her teacher in Spain, whose voice is amplified through the Clifton Centre’s sound system; she may be audible, but comprehensible?   I think I caught one word in four, possibly because of the thick Iberian-imitating accent adopted by the speaker.   Add to this the unremarkable nature of the text  –  elderly maternal know-all versus young, tolerant ingenue  –   and your tolerance was stretched to the point of something approaching discomfort.

In the next scene, the cellist talks with a clearly irritating friend (unheard by us) about their work, specifically our heroine’s preparation of the Borodin String Quartet No. 2.   She then rings one of her former professors, who has retired but still takes calls from importunate ex-students,  to ask him about a piece she is preparing for recital.   He feeds her a one-liner and that’s that.   So far, so superficial.   Yet you hold your horses, refraining from judgment because the situation depicted is possible: musicians are notoriously un-intellectual and monomaniacal, most of them incapable of sustaining a conversation that stretches beyond their own interests.

The Spanish teacher’s son, Jose, calls to inform our girl that her inspiring teacher has breathed her last  –  which leads to the remarkable claim by the former student that she’ll be there for the funeral; obviously, freelance instrumental work pays better than you’d thought.

Then comes a scene where the protagonist delivers some random observations  –  direct to the audience  –  on Bach. Yes, we’ve been hearing his music for some time throughout Suite Life and an observation or three would not be amiss.  But the address is packed with unconnected banalities – what sort of a dancer he would have been (judging by the cello suites, not so hot),  the size of his family – and its relationship to the musician herself is tenuous.   Finally, the cellist has a conversation of mind-numbing cliches with her mother before setting off to a gig, at which she will apparently play her teacher’s instrument and so release the music that is inside the cello itself.   Shades of Michaelangelo releasing the image from the marble.

I enjoyed Vains’ playing, chiefly the E flat Major suite’s Sarabande that ushered in the interval space.   Each sinuous melodic curve came down from the player’s lofty position with an unanticipated energy, the acoustic so responsive you could appreciate the hiss of bow on string and the player’s considered left-hand positioning.   For the more mobile dances, like the final C minor Gavotte and the portly Gigue, Vains went as far as any player should in observing a steady pulse, but the main impression I took away from this composite suite was of her instrument’s physicality and the labour involved in urging out Bach’s real and implied polyphony.