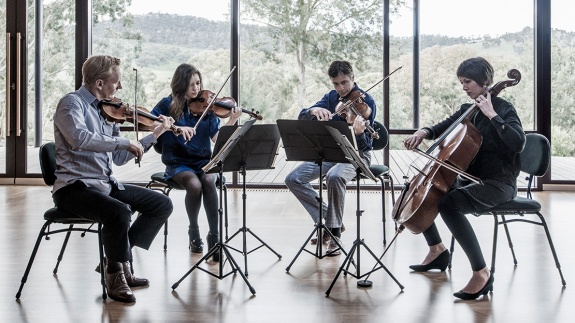 Among the good things coming to an end at this time of year was this last appearance for 2017 in the Recital Centre by an excellent ensemble, now steady on its eight feet after some years of disruption.   Three composers featured at this event, one of them something of a ring-in; despite the best efforts of violist Stephen King in tying the writers’ works to the night’s title, you were hard pressed to see how much of a beginning is represented by Beethoven’s first Razumovsky.

The ASQ went back as far as it could for its first instance of a beginning, although the possibility that Alessandro Scarlatti wrote the first string quartets and set the form’s ball rolling sounded like a bit of a stretch, unless you define the form as simply involving the four formally accepted instruments – in which case Scarlatti is all the go.  But the D minor Sonata a quattro, No. 4 in the set of six, presents more like a slightly unhinged sonata da chiesa: a Largo, followed by a brief Grave, an Allegro at the centre (really a presto on one figure), followed by a slighter Allegro and a rather disconsolate Minuet to finish.  There’s not much to get excited about in this brief work, although these players demonstrated their well-directed intonation by working with precious little vibrato to hand, the process at its most interesting in the initial fugue.

Moving from the beginnings of the string quartet personnel format, the ensemble changed direction to the start of a 20th century giant’s grappling with the form in the Bartok String Quartet No. 1.   Like the little Scarlatti, this thrilling score begins with canonic interplay but the atmosphere generated in this Lento is hardly Wagnerian or even Brahmsian as Sharon Grigoryan suggested in her prefatory remarks but more the Schoenberg of Verklarte Nacht which was written almost a decade before this work.  As with so much of Bartok’s chamber work, the material being manipulated is cellular more than thematic and the players had put in the hard yards to give the movement a convincing advancing- and-receding dynamic mesh, honestly direct in their treatment of the composer’s gritty dissonance.  An oddity I’d not noticed before came in the premonitions of Janacek that break out at bar 38 in a driving duet between second violin and viola – or possibly such a throw-forward impression came from the compelling work of Francesca Hiew and King at this point.

The musicians’ account of the following Allegretto came close to being the recital’s high-point, in large part for the passionate, no-holds-barred handling of the movement’s taut material and argument.  The inter-instrumental dialogue is very striking here, to my mind because you have few distractions – none of the violent snapping pizzicati or other  sound-production techniques that pepper the later quartets.  Further, Bartok holds his performers to a common task for much of the time – everyone moving to the same pulse, if not in the same direction – but he also introduces passages where individuality is paramount and the counterpoint at work is a four-line melange, as at bar 84 where the dynamic is moderate but the parts go their individual ways.

Bartok’s Allegro vivace finale brings folk-song into prominence, although its presence is more in shape than actuality.  Here, the ASQ kept to rational, sensible speeds, driving through the asymmetric dance rhythms, then prepared to dedicate space to interludes like the Adagio at bar 94 with its luminous, unexpected C Major concluding chord.  Later, the group revealed a fine line in communal restraint when confronted with the ppp sotto voce passage at bar 330 – momentary linear wisps before the leap towards the fifth-rich finish line.  Yes, the movement is long-winded, the restatements can border on hectoring, but this interpretation was carefully spelled out, elegant in its vehemence and negotiated with minimal scraping.

This work showed once again what a splendid space the Murdoch Hall is for chamber music, the quartet’s sound during the Bartok clear even to the back of the stalls.  This aid to focus proved even more useful in Beethoven’s Op. 56 in F Major which, more than the Hungarian master’s score, is prolix.  Nevertheless, even the sprawling first Allegro slipped by smoothly, animated by first violin Dale Barltrop‘s polished upper line; what I like about this player’s chamber music work is his lack of fluster – everything seems to fly into place and phrases are properly finished, given their full weight.

Beethoven’s scherzo juxtaposes sledgehammer force with featherweight passages as in the last 22 bars or so.  It’s about at this point that the composer’s insistence on pounding the message home starts to test your tolerance.  The problem is that, no matter how expert the players, not much can be done to alleviate the fact that Beethoven is beating you around the ears while he nails his matter home.  The assault is less aggressive in the following Adagio (which thankfully was taken at a mobile pace rather than dead slow) but again the work is garrulous and the players showed occasional indications of fatigue.

Many commentators find this quartet’s second half fails to live up to the majestic assurance of its first movements but I can’t find any decrease in inspiration, even in the jaunty theme that Beethoven employs as the basis for his finale.  Yes, it kicks off yet another long sequence of paragraphs but the pressure on an audience is more benign.  Not so for the performers and they were stretched by the movement’s sheer doggedness, as in passages like that beginning at bar 141 which doesn’t loosen its rhythmic grip for some time; the trouble is that the harmonic motion is often close to sedentary and the concluding Presto rush always comes as a relief.

In a certain sense, this quartet was a beginning.  It signified a break with the style of Beethoven’s preceding Op. 18 set of six works; his new field of endeavour in this form was more daring in form and emotional challenge.  As well, the demands on executants are greater, not just in stamina but in individual mastery and responsibility to the ensemble itself.  You had to be favourably impressed by the ASQ’s outlining of the score and their engagement with its challenges but I came away with more respect for the workers than enjoyment of the experience.