SONGS TO A DISTANT BELOVED 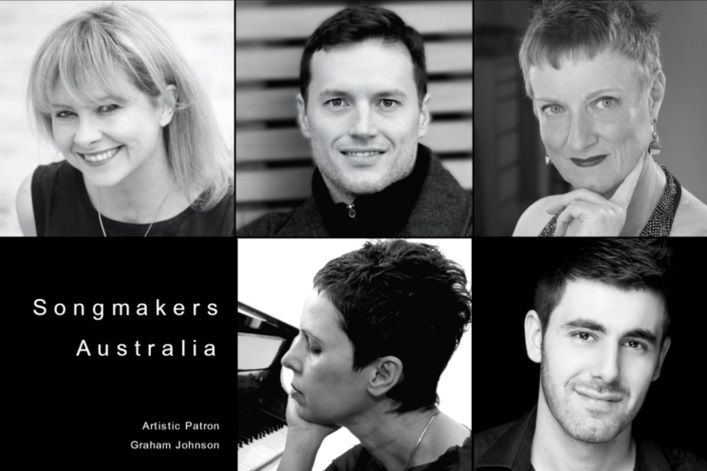 Opening this year’s short account – two recitals only – the vocal quartet and pianist that make up the Songmakers Australia personnel headed for the top with a program of Mozart, Beethoven and Schumann, although not necessarily familiar pages from these keystone markers of the song repertoire.   Mozart’s Six Notturni, for example, are rarities on disc and in performance; not surprising when you take into account the required accompaniment of three basset horns in four of them, with two clarinets and one basset for the others.  On this occasion, the Songmakers’ founder, Andrea Katz, played a piano reduction which robbed the small-framed scraps of a textural interest but you had to wonder if much of that buzzing colour would have stood out under the combined voices of soprano Merlyn Quaife, mezzo Sally-Anne Russell and bass-baritone Nicholas Dinopoulos.

In fact, these vocal trios are dubious in their attribution to Mozart, although the authorities are as one in sourcing the final one, Mi lacero tacendo, to the composer while divvying up responsibility for the earlier ones between Mozart and a member of the Jacquin family for whose entertainment they were written.  Whatever the case, the writing is cleverly contrived so that the voices enjoy a balance in performance, these singers by now well used to collaborating.  Even so, you won’t find any shrinking violets in this ensemble and I suspect that some of these mainly binary-form bagatelles enjoyed a sturdiness of attack that they would rarely have experienced, but the final Mi lagnero tacendo, through-composed, brought to mind, more than its companions, the Act 1 trio in Cosi fan tutte, prefiguring Soave sia il vento by seven years but giving hints of its  elegantly drawn phrasing and slightly chromatic bite.

Tenor Andrew Goodwin gave a masterly account of Beethoven’s seminal cycle An die ferne Geliebte, investing each of the six linked songs with  a ringing force that proved more than a little compelling in the Salon’s closed space.   Recently, Goodwin sang the Evangelist’s part for the Melbourne Bach Choir’s Good Friday performance of the St. Matthew Passion and thereby brightened an experience that can be more penitential than needed.  This Beethoven exposure gave fresh insights into the quality of his voice: evenly-applied colour across most of his range, bright and crisp articulation, absolute confidence in pitching, penetrating individual richness to each sustained note, no hesitation in taking on  slightly awkward melodic arches as in the first part of the final Nimm sie hin denn, or lending an interest in passages where the vocal line stalls like the monotone at the centre of the second song, Wo die berge so blau. Further to this, Goodwin made an excellent counter-force to Katz’s strong delivery of the accompaniment; a persuasive alternative to the often soppy, Schubert mimicry of many another interpretation.

Schumann’s Spanisches Liederspiel came to me – and quite a few of us, I think – as a complete novelty.   None of the songs was even vaguely familiar; seven of them are duets or quartets but not even the solos rang any reminiscent bells. With all four vocalists ready and keen, the original 12-song cycle took off with gusto from Quaife and Russell’s volatile reading of Erste Begegnung, through to Goodwin and Dinopoulos’s gentler Intermezzo. Several pieces stood out: Quaife’s ardent reading of In der Nacht, joined half-way through by Goodwin who continued the lambent intensity of this interpretation; Dinopoulos enjoying the lilting jauntiness of Flutenreicher Ebro (one of the songs Schumann cut from the cycle after its premiere) and struggling to keep up in Der Contrabandiste which, even if its tempo direction is Schnell, would have gained from a less pell-mell approach; the elation that characterised each verse of the concluding Ich bin geliebt, coming to rest in a final rousing A Major chorus of affirmation.  At its end, a pleasure to make the acquaintance of this collection and to hear it treated with a bracing combination of brisk animation and sensibly-applied musicianship.