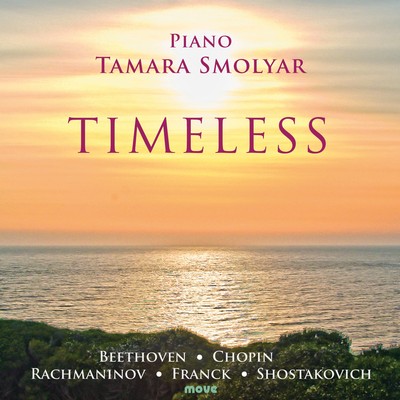 A luminary at the Sir Zelman Cowen School of Music at Monash University, Tamara Smolyar is one of this city’s foremost pedagogue/practitioner pianists.   The product of an extensive number of Ukrainian, Russian and Australian teachers. she is well-known outside Monash circles for her partnership with violinist Ivana Tomaskova in the Duo Chamber Melange recitals at the Melbourne Recital Centre.   On this disc, she performs a pretty broad program of works that she has made part of her repertoire, a few of them familiar but most more honoured by reputation than by performance.  As she indicates, the music itself transcends its own time of creation, having become part of our long-running and all-too-familiar European tradition.

Smolyar begins with the CD’s earliest music, Beethoven’s 32 Variations in C minor, which she works through with assurance and a no-nonsense approach, handling the first eleven of the set as a continuous unit before the tone changes to the major at Variation 12.  The performer is linked to a substantially authoritative and orthodox school which takes its Beethoven without reconstructions or torques on accepted practice, so the return to the home key in Variation 17 continues the direct, somewhat pell-mell attack that leads to the elongated final variant which brings the piece to a determined conclusion.  The work is carried off clearly enough, although Smolyar is not hesitant in using the sustaining pedal, even during the more thick-textured passages.

Next come two Chopin nocturnes from the back of the book: the Op. 62 No. 2 in E Major and the posthumous Op. 72 No. 1 in E minor which are the last and first written in the sequence.   For the E Major Nocturne, Smolyar holds back on the potential for glitter, taking plenty of time over the mini-cadenzas that punctuate the melodic flow but heightening the drama where it should be emphasized from bar 40 on with a sensible subdued thunder in the work’s low-lying central segment.  The composer held back the E minor attempt and, to me, the piece only gets into its stride at the octave restatement of the first theme.  But this interpretation offers a fair case for the nocturne’s survival in the canon, the later treatments of the material handled by Smolyar with sensible restraint and flexibility.

A bracket of Rachmaninov impresses for its internal variety.  The Elegie in E flat Minor makes its points across a canvas of slowly rising passion with some fierce moments of intensity in the later pages, the elegiac quality eventually subsumed in tragedy.  Smolyar comes closest to familiar ground on this disc with the Prelude in G sharp minor giving a generous account of the piece’s difficult central stages, the metrical disposition changing from the continuous current of semiquavers in groups of six.   To her credit, Smolyar makes light work of the many punctuating splayed chords, even if you might have expected a greater dynamic explosion in the lead-up to the D sharp Major climax.  But the outstanding element in this set comes with the Etude-tableau Op. 39 No. 1, coherent for once as a study that tests the right-hand’s stamina and the rhythmic security of the left.  A continuous energetic surge that becomes more impassioned as it progresses, this remarkable exercise in dexterity enjoys an unexpected clarity of texture in this realization.

Shostakovich’s Prelude and Fugue in E flat minor provide a bracing, slightly acerbic interlude with an enviable lightness in the four-part fugue, all the more appreciated after the fraught, tremolo-informed harbingers of disaster that precede it.

So far, the recording’s origin has been the Iwaki Auditorium in the ABC building, Southbank.   For the last piece, Franck’s Prelude, Chorale and Fugue, Smolyar changes venue and piano.   It remains unclear what instrument the ABC provided but she uses a Schimmel Concert Grand for this last offering and the sound becomes less full-bodied; clearer to discern the composer’s contrapuntal interweaving, but more bright in its timbral quality.  The artist handles with calm virtuosity the score’s many demands – the roiling sequential exercises of the first part, those solemn rolled chords in the chorale and the all-in-together-boys textual imbroglio of the work’s last section – yet the final impression is more of a task well accomplished than an engrossing journey from restlessness to affirmation.   Still, the CD as a compendium serves as a reminder of the many byways available for exploration to be found in between (or behind) the better-known masterworks of the serious pianist’s basic repertoire.