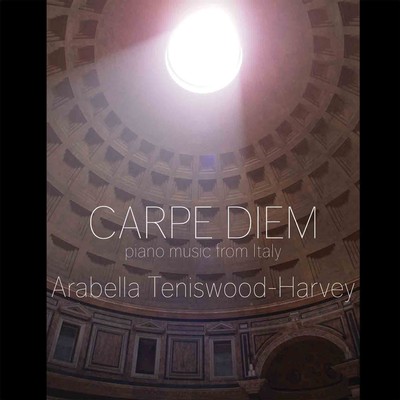 Quite rightly, this pianist subtitled her disc ‘piano music from Italy’.    Not all the composers she performs are Italian; in fact, only two of the six were citizens – Respighi and Castelnuovo-Tedesco.    The others are a mixed bag: that citizen-of-the-world-if-originally-Hungarian Liszt, New Yorker Charles Tomlinson Griffes, Poitiers native Pierre Petit, with Sydney son and this performer’s husband, Michael Kieran Harvey, providing the album’s title work.

And the geographical spread of the music is a limited one.  Liszt’s Les jeux d’eaux a la Villa d’Este celebrates the lavish fountains near Rome;  the Roman Sketches by Griffes depict four aspects of the city, although only one is site-specific; Petit’s Rome, l’unique objet  .  .  .  refers specifically, in turn, to the Pincio Hill, the Tiber complete with sea nymphs, the church (probably) of San Carlo alle Quattro Fontane, with the Villa Borghese’s riding track bringing up the rear; the Australian composer’s work takes Respighi’s Pines of Rome as a launching-point.

As for the native-born, Castenuovo’s contribution is Onde, two studies helpfully differentiated as Short wave and Long wave.   Respighi gives vent to one of his interests in Tre preludi sopra melodie gregoriane; repeated listenings with a score have failed to help in detecting which Gregorian chants were used.   However, neither composer suggests anything Roman in these pieces.

The other element that permeates he CD is water.  Liszt’s description of the Este estate’s fountains is one of piano literature’s most impressive aquatic flights of fancy before Debussy and Ravel.   Another fountain, that of the Acqua Paola on the Janiculum, inspired the third part of Griffes’ suite and he draws an accomplished, brilliantly pointed series of images, remarkable for several reasons, not least that the composer never set foot in Rome.   Castelnuovo-Tedesco follows Griffes’ impressionistic approach for his two types of waves, while Petit’s river-picture populates the stream with Nereids – and he knew the city because he won the Prix de Rome in 1946.

Teniswood-Harvey handles this sometimes arcane material with admirable command.  The Liszt work is a restrained reading compared to those recorded by more flamboyant, effect-craving pianists, and its pages are negotiated without interpolated histrionics or nerve-tightening  fluster.  Real rarities, the Griffes pieces enjoy excellent treatment, their author’s uneven key signatures and mutating metres enunciated with an underlying stability that gives the composer great service, especially in his The Fountain of the Acqua Paola and White Peacock sketches more than in the not-as-original Clouds and Nightfall movements.

Both here and in Respighi’s preludes, Teniswood-Harvey makes her most eloquent cases. If the Gregorian is undetectable, the virtuosity needed to handle demands on sheer stamina in the middle one and sustaining the elongated tension in the last is impressive.  Further, the pianist keeps the preludes’ textural complex lucid, particularly in the three-stave spread of the concluding Lento.  By comparison, the Petit pieces strike me as amiable atmospheric rambles, the San Carlo section making a striking initial impression for its unexpectedly determined statement while the Galoppatoio bridle path, despite its suggestive title, could be depicting anywhere.

Harvey’s work, an injunction to action before it’s too late, was written as a birthday present for its current interpreter.   Aggressive, restless, packed with notes, it grabs attention straight away – like its composer in action – and doesn’t let up, even when the dynamic level sinks.   Inspired by the pines in the Villa Borghese gardens, Respighi’s opening movement depicts children playing – actually, rorting around the place with no concern for the plant life –  and Harvey mirrors the original’s frenetic action, although the emotional effect is more serious.   At the same time, it offers a final reaction to Rome that brings the disc to a close with a driving contemporary edge.  It’s all well worth hearing, both for the high quality performances and for the opportunity to hear some illuminating rarities.