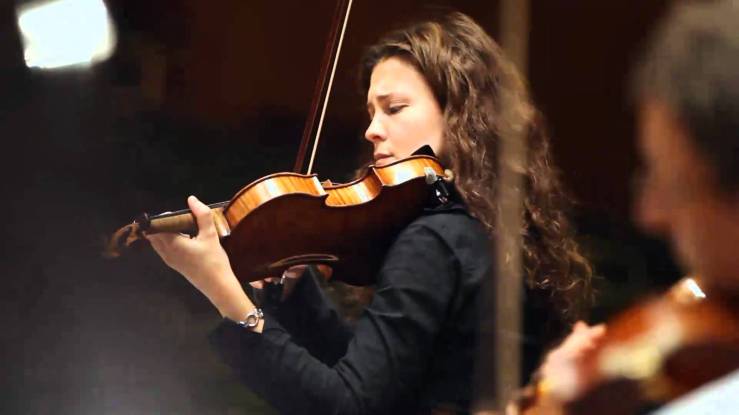 At the last of its national series concerts this year, the ACO enjoyed the attention of a replacement director in the Italian-born violinist Lorena Borrani, leader of the Chamber Orchestra of Europe.  For much of Monday night’s proceedings, she followed the Tognetti principle of leading from the concertmaster’s stand, although less likely than the organization’s artistic director to use her bow as a baton; indeed, I didn’t see her have recourse to this control mode at all and the precision level of the players’ entries didn’t seem to suffer in any of the three works programmed..

Borrani made her solo offering at the start with Schnittke’s Sonata for Violin and Chamber Orchestra, the latter entity comprising strings (about 15) and harpsichord.   For me, the Russian-German composer’s music has presented continual problems; the first work I heard, it seemed, was written by a committee – you couldn’t nail down a specific voice or character to it.   At the time, I said to a moderately enthusiastic John Sinclair, critic for the Herald and also coming to Schnittke’s work for the first time, that it sounded like something written by a committee, each of the movements allocated to specific members.

This sonata goes some way to exemplifying this evaluation although, in these latter days of enlightenment, most of us have become aware of the composer’s adoption of multiple tongues in the one work like this one where a grating acerbity exists alongside common chords that suggest the religiously inspired products of recent Scandinavian and Baltic mystic-writers; and where a meditative Andante of stern serial shape is balanced by a bounding dance movement owing much to jazz and its offshoots.

Borrani showed firm control in each of the four movements, nowhere better than in dialogues – if one-sided in format – with Anthony Romaniuk’s harpsichord, used as a brisk punctuating presence or for its grinding pebbles-imitating potential.   Most of the sonata’s interest lies in the solo violin line which rises to high technical demands and asks its interpreter for a constant variety in production techniques.   Of course, Borrani met each requirement with impressive authority; but then, she has been performing this piece for some years now, directing her Chamber Orchestra of Europe colleagues in it two years ago.  She forged an uncompromising path for the ACO players to follow, notably in a series of slashing chords that cut across the sombre path of the initial movement’s pages, some very soft floating chords in the work’s later stages, and an attractive astringency to give a febrile background for the soloist’s more ardent bursts of action.

Schubert’s Five Minuets with Six Trios for string quartet in an anonymous arrangement enjoyed a vital treatment where the original’s expression markings were observed with high enthusiasm and the players worked through all the repeats.  Pleasant bagatelles, these pieces hold few surprises beyond a few disruptions of expectations where the usual division of eight-bars-per half in both minuets and trios changes, as in the third minuet where the second half is 16 bars long, while its second trio has a second half of 12 bars (and in this reading a liquid solo from Borrani above pizzicato accompaniment), as does the second trio to Minuet 5.   Schubert’s melodies have an assertive energy but the only dramatic (i.e. interesting) moments come in a few bursts of polonaise rhythm – the second trio of Minuet 1 and a couple of bars in Minuet 5 – and the musette/trio to the latter.

Beethoven apparently had a liking for his own C sharp minor Quartet Op. 131, according to one contemporary authority – Karl Holz, the composer’s secretary during the late quartets’ gestation.   No one can deny its incomparable breadth of content and emotional illumination but its transference to string orchestral guise is a dubious undertaking – something I’m coming to question about the whole Beethoven oeuvre in this form. The justification usually advanced revolves around a clarity that is bestowed on the middle lines when you have a number of players dedicated to them.  To my mind, that’s not a relevant argument, suggesting rather a lack of concentration shown by the listener or an incompetence on the part of the musicians involved in the quartet’s delineation.

Of course, with all lines reinforced, the score’s nature is changed into something more sonorous and substantial, particularly in the A Major set of variations and the athletic final Allegro.  Additionally, this interpretation proved very attractive as an aural experience, Borrani asking for pronounced dynamic differentiations, an edgy bowing attack in each Allegro and the Presto,  and a rapid response rate in passages like the fifth movement’s sudden shifts  –  to Molto poco adagio interludes, and to those two delectable Ritmo di quattro battute breaks in the pages’ fleet-footed propulsive drive forward.

Monday’s well-populated house received the performance with enthusiasm and it served as an excellent showcase for the participants’ expertise and sharp-as-a-whip, finely honed ensemble.  In a week when Wagner’s Ring is rampaging at the State Theatre next door to Hamer Hall, this view of Beethoven rang plenty of complementary Romantic bells and brought out strongly the composer’s vehemence and dramatic urgency – qualities that appealed to the later writer.  But, for me, this unsurpassedly rich tapestry of a string quartet was changed into something more in the nature of a concerto grosso – bigger, not necessarily better.