SONGS OF THE NIGHT 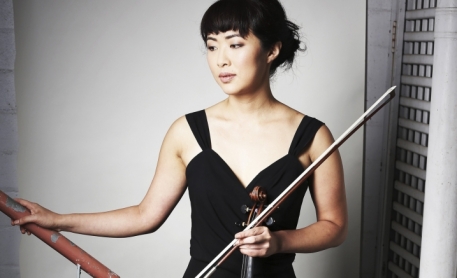 An afternoon of nocturnally inspired music curated by guest director Rebecca Chan: that’s what was proposed at the latest MCO subscription series concerts.  With a willing band of young players, Chan took us through some excellent performances in a program that moved across the set theme, the primary intention of which must have been to keep us entertained.  This worked well enough for most of the time, including an excellent second half to the event; the multiple compositional voices proved too strained, however, in the concert’s middle passages.

Chan began by leading a transcription of the Prelude to Wagner’s Tristan und Isolde for strings alone; an imaginative way to open a concert with this underpinning theme; after all, Act 2 is conducted under cover of darkness.   Of course, you missed the antiphonal interplay between strings and woodwind, as well as the powerful moments of release that come in the original’s full-orchestra chords, but the 13-strong MCO worked up the passion effectively.   This arrangement by Sebastian Gurtler, one-time concertmaster with the Vienna Volksoper Orchestra, didn’t fade as expected into silence for the curtain-rise to Act 1 but worked its way into a postlude: the latter stages of the Liebestod that ends the opera.  A bit of a cheat, even if it leaves the audience’s inner tensions resolved.

Tenor Andrew Goodwin opened his contribution to the field of nightscapes with Strauss’s Die Nacht, from the 8 Gedichte aus ‘Letzte Blatter’, the composer’s Op. 10 and first published lieder.  The arrangement for strings was unattributed but suitably supple, Goodwin exercising his telling clarity of articulation, at its most moving in the final stanza’s Rucke naher, Seel an Seele.  Speaking of early songs, Schoenberg’s Waldesnacht, arranged for strings by Chan, followed; this, along with the concert’s final work, Verklarte Nacht, gave the unwary a one-sided picture of the composer as a thorough-going Romantic – which, at this stage of his career, he was.  This song comes from Schoenberg’s early 20s and, despite its chromatic side-slips, gave Goodwin no problems, although every so often the string action distracted attention from the vocal line.

Finishing this group was Schubert’s Der Erlkonig in a version by Gregor Huber which exercised the violins, just as the original gives a workout to the pianist’s right hand.  In this format, much of the song’s gruffness is dissipated but Goodwin managed the three voices inside the lied with aplomb, especially the persuasive, then threatening lines from the Erlking himself  – treated without bombast so that the hurtling drama of the narrative came across as a sustained crescendo, rather than a series of jolts.  You missed the piano’s compelling clatter but the ever-startling vehemence of the 18-year-old composer’s vision came across unimpeded.

Chan arranged the Scherzo from Mendelssohn’s A Midsummer Night’s Dream incidental music, spreading the work-load around to make up for the absent woodwind piquancies. It made for a mildly entertaining experience, pretty well negotiated by the MCO band, but eventually unsatisfying; very much a second-best, if you know the original.  For a complete change from Mendelssohn’s suggestions of Puck and Co. cavorting in the Athenian wood, Chan moved us to Bartok’s Fourth String Quartet, specifically the middle ‘night music’ Non troppo lento movement which worked more credibly, principally because the forces involved were relevant and credible.  Even so, it might have been wiser to play the piece as written without a Tognetti-style amplification, although it spiced matters up quite a bit to see both cellists sharing the honours in outlining their part’s elastic solos.  But the central Agitato segment with all the insect noises loses a good amount of its spark when being negotiated by a corps rather than an individual.

Written for the MCO, Lachlan Skipworth’s Rilke setting, The Expanse, found a persuasive exponent in Goodwin.  The lyric, Am Rande der Nacht, enjoys a calmly restrained handling, the composer constructing a darkly-coloured string backdrop for a mendicant vocal line well suited to the poet’s effete self-description.  Coupled with this was Schubert’s Nacht und Traume, another Chan arrangement, this time giving Goodwin the opportunity to demonstrate his talent for manufacturing a splendidly sustained slow-moving vocal arc in a song that consists of little more than an emotional stasis, albeit a deeply moving one..

Before the Schoenberg string orchestra version of his own sextet, Goodwin ended his night journeys with two more Chan-arranged Schubert lieder: Nachtstuck, which depicts an old man’s progress through a consoling landscape to his death, and the first song from the song-cycle Die Winterreise where the disappointed lover sets out on his journey towards inconsolable grief.   In the first, attention oscillated between the deftness of the transcription and Goodwin’s warmth of tone in the valedictory last two stanzas; but in the reading of Gute Nacht, all the honours went to the tenor for an interpretation of high quality, the four-square phrases announced with assertiveness and  a subtle shifting of emphasis that was probably as much part of the performer’s musicality as it was built-in by Schubert.

Even after almost 120 years, Verklarte Nacht is still a taxing challenge for its executants.  Nothing about it comes easily, not even the slow threnody of the first pages.  When the polyphonic meshing kicks off and the modulations pour in on top of each other, the players can’t afford to relax or take their eyes off their own work or off that of their fellow labourers.  Chan and her charges gave a pretty solid account of this score which avoided quite a few of the expected deficiencies.  In fact, only one occasion raised eyebrows  – at about bar 246 in the lead-up to the first ‘transfiguration’ section where the lower strings sounded disorganized and uncertain in their triplets’ timing.  An unexpected moment came about when second violin Peter Clark appeared to change his focus by helping out Tom Higham with his viola line for a stretch before returning to his regular duties.  By this stage of the concert, I was sitting at the back of the Murdoch Hall but, even from that distance, I don’t think I was suffering from delusions.

Chan kept the score on the move, well aware that the point of the work is a journey, not a series of stops and starts.  The players gave full measure to the thick welters of sound that make up the central, confessional part of the work, but the forward movement stayed on track, even if some of the sudden harmonic shifts had little time to breathe.  Still, the work made a neat balance to the opening Wagner, a score that set the bench-mark for chromatic Schoenbergian constructs.   In all, a worthwhile dark odyssey, despite a few mis-steps along the way.