THE END OF TIME 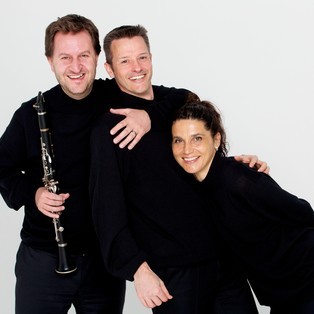 For their last Melbourne appearance this year, the Liaisoners – clarinet David Griffiths, cello Svetlana Bogosavljevic, piano Timothy Young – hosted Dene Olding, recently retired concertmaster of the Sydney Symphony Orchestra and lead desk in the Goldner String Quartet.  Another guest reserved his talents until the night’s second half: lighting designer Paul Jackson who exerted an optical influence over the Messiaen quartet that gave this night its title . . .  sort of.  Fellow lighting-man Danny Pettingill contributed significantly to the visual scheme as well.

Opening Tuesday night’s bill, Bogosavljevic and Young collaborated in Schumann’s Adagio and Allegro Op. 70, originally written for horn and piano but authorised by the composer for violin, viola or cello consumption.  Simply put, the two movements sound most convincing in the original formulation, although you could not fault this cellist’s delineation of the slow opening, especially in the plangent tenor-clef higher passages where the player’s pitching proved pretty exact.  The Allegro poses a bigger problem in audibility, especially as its bold opening descending gambit is swamped even by a considerate pianist, so that the flourish tends to fade into a secondary role unless the player is capable of urging out volume commensurate with the keyboard’s three reinforcing forte chords.  Still, the players worked their interpretation into the pages’ irresistible verve and maintained our interest through the movement’s intervening episodes.

Australian writer Samantha Wolf wrote There Is Only Now specifically for the ensemble’s forces,  Griffiths being asked to play a bass instrument as well as the regulation clarinet (B flat or A? I still find it hard to tell).  A pale, limpid texture from the cello and clarinet began the piece’s premiere hearing with some piano chords for atmospheric support, but it soon became clear that Wolf’s vocabulary offered not just impressionistic dreaming but a definite alternation between straight tonal material and passages of not-too-grating bitonality.

The work seemed to fall into three segments, the last a revisiting of the opening scene after an optimistic, rapid-moving central core.  At the end, an unexpectedly elegiac solo from Young, you realized too late (for ‘you’, read ‘I’) that Wolf had been dealing chiefly in motivic cells, not melodic arches, and the piece’s progress had featured expanded and compressed versions of these note groups.  Underlying the composition itself is a statement of faith expressed in the title but I can’t recall whether the emphasis is placed on living for the present because that’s all there is to your life, or whether each moment should be relished as a testament to one’s joy in life as it is, no matter how rough or smooth your particular situation happens to be.  Down at ground level, I admired the performers’ zeal, even though some synchronicity errors emerged in a duet of abrupt explosions between Griffiths and Young.

Olding took the lead role in the trio concert suite from Stravinsky’s The Soldier’s Tale, put together by the composer as a thank-you for the affluent amateur clarinetist Werner Reinhart who financed the staged work’s premiere.  This began well enough with a suitably jaunty inflection to The Soldier’s March.  But tension arose in the following The Soldier’s Violin when Olding’s instrument suffered a malfunction; I’m not sure what it was but it looked like his D string lost its tension and the movement had to be re-started after a considerable break.

And this had the inevitable result of making you (me) fearful of the problem recurring so that attention during The Little Concert went out the window while you  (I) kept on expecting the worst; stupidly so, as matters turned out because the violin-forefronting Tango-Waltz-Ragtime was carried off with fine flourish and dextrous responsiveness to Stravinsky’s time-signature changes and abrupt side-steps. Young realised the challenging piano part with diplomacy, Griffiths enjoying the role that the composer gave – a none-too-taxing one, even in the concluding The Devil’s Dance – to his financial backer.

We came back after interval to a Murdoch Hall filled with smoke – which had almost cleared by the time all four musicians came on stage for the Quartet for the End of Time, Messiaen’s most popular and accessible statement of faith.  The lumiere contribution to this experience was pretty bland when compared to the overwhelming son canvas but a few movements made simple dramatic points, most significantly Griffiths’ solo on Abime des oiseaux, delivered from memory and in a dark blue spot which only suggested the player’s shape.  To be honest, I’ve heard Griffiths articulate this movement with more intensity, and one of the very soft echo passages failed to travel  to my seat.

Still, Bogoisvljevic’s account of the Louange a l’Eternite de Jesus impressed for its consistency, barely a tremor noticeable in its long, stately progress.  Later, you had to be exhilarated by that dangerous Danse de la fureur, pour les sept trompettes where all four players vault in unison across Messiaen’s irregular patterns of melody and rhythm.  And Olding with Young produced a moving timbral ascension for the concluding Louange a l’Immortalite de Jesus where the composer looks towards the eternal and finds a kind of static ecstasy.

Despite the moderate colour scheme – reds mainly, with an appealing white-and-cream for the excellent violin and cello octave duet in the Vocalise, pour l’Ange qui annonce la fin du Temps – this performance worked at its best in dialectically extreme moments: long essays in stasis or pithy and controlled explosions of action.  What was surprising on this occasion was how quickly the score was completed.  Many of us would have experienced readings that seemed to stretch out till the crack of doom, but this version from the Liaisons and guest Olding seemed almost brisk.   Or possibly we’ve become inured over the years to Messiaen’s penchant for longueurs when delineating his own soul’s theological odyssey.