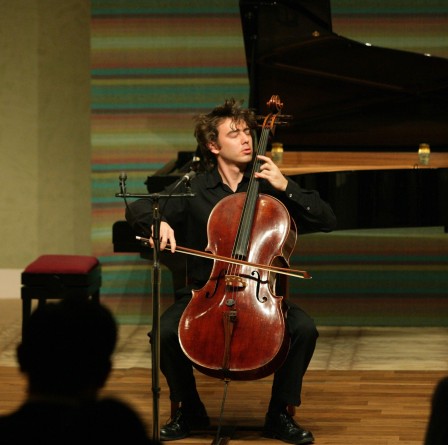 Kathryn Selby appears to have made the change from Federation Square’s Deakin Edge to this MLC venue in Kew/Hawthorn very successfully.   I wasn’t present at the final series recital last year, the first in the Tatoulis Auditorium, but this all-Beethoven night looked close to having sold out all 360-odd seats; clearly, a large group of her patrons have followed Selby east of the city.   Let’s hope these numbers stay high.

Of course, the impresaria/pianist was catering to her followers shamefully with this first program for 2018.   Last year, she polled her audiences in each state, asking what Beethoven they would all like to hear, and the results were unremarkable.   For the piano trio format, patrons wanted the Archduke – surprise, surprise .  From the cellist, the popular pick was the A Major Sonata, as opposed to the more interesting Op. 102 double; the violinist had to take up the Spring Sonata No 5, rather than the dazzling Kreutzer No. 9 or the gripping C minor No. 7.

Selby inserted her own curtain-opener with the Allegretto in B flat WoO.39 which gets listed in the inventory of Beethoven’s piano trios but only just, as a work without a catalogue number.  An amiable single movement with unexpected subtleties, it’s yet another one where the piano sets the pace, having first dibs at all the material while the two strings spend most of their time repeating the subjects or providing sustained chords and ephemeral passage-work.  Still, this short fragment enjoyed carefully shaped treatment from Selby and her guests, violinist Grace Clifford and cellist Clancy Newman, both of whom have appeared previously in this series back in its city-based days.

In fact, Clifford made a serious impression on Melbourne when she performed Bruch’s Violin Concerto No. 1 under Benjamin Northey with the Melbourne Symphony Orchestra two years ago.   Since then, her production has become even more refined, displayed in its best light during her reading of the Beethoven sonata on this night.  It shouldn’t be hard to credit by those who have encountered her before, but the opening Allegro last Wednesday night was remarkably pure in projection, Clifford filling each corner of this decently-sized space with an individual timbre; not overdoing the vibrato or taking any distracting dynamic or rhythmic liberties – just a calm, luminous account of very familiar pages.

Both collaborators found an even easier working relationship in the work’s Adagio, sustaining the music’s pulse through some ornate figuration, then skittering past the insubstantial Scherzo.  Yet Clifford shone at her best in the rondo-finale with a splendid sonorous arch at the start that delighted for its clarity and self-possessed ardour, qualities that remained evident throughout the movement’s piano-flattering progress.

Newman’s view of the A Major Cello Sonata is a highly theatrical one, emphatically so in both outer movements.  Each dynamic shift was given full weight, starting with the first A minor passage after the string instrument’s first ad libitum interlude at bar 23.  Then the forte launch into E major at bar 64 punched us between the ears, as it did on its recurrence at bar 201 when I thought the cellist’s pizzicati were turning into percussive Bartokian snaps.  It kept you involved, for sure, but the movement’s unfolding came about punctuated by a sequence of shocks that interrupted the score’s usually even deliberation.

Later in the Allegro vivace conclusion to the sonata, Newman relished his stretches in the tenor and treble clefs to give Selby a good deal of competition throughout a pretty rapid treatment of these toccata-suggestive pages.  For all his driving energy, this cellist is near-faultless in his pitching of notes and has that vital necessity for any player attempting this work: he can be heard all the time, whether sustaining semibreve bass notes or striving against the keyboard’s fortissimo passage-work as at bars 209-212.

The players re-grouped for the Archduke and handled its pages with an easy familiarity.  In fact, Newman seemed to have a lot of it by heart and kept both eyes on Clifford’s bowing arm for much of the opening three movements, an observance that resulted in some fine close collaboration in the work’s Andante cantabile, like the second duet-strophe for both strings that rivalled the best readings I’ve heard, and their later collaboration after the piano stops faffing about and settles into the final re-statement and coda – pages that crown the preceding variations with consoling beneficence.

As a small observation, have you heard another pianist who can handle this work’s scherzo with as much calm authority as Selby?   I don’t just mean the eruption into a D flat Major waltz at bar 160, although that is briskly treated with exactitude always, but just simple statements like the piano entry at bar 16 which in her hands comes over with a sort of pert diffidence, trippingly on the tongue.

All the more remarkable because I had my doubts about the instrument that Selby used.   While investigating the facilities at MLC last year, she found an old Bosendorfer grand in the music school’s storage space and thought how appropriate such an instrument would be for a program of this character.   Quite right, even if these pianos-with-a-pedigree make you work harder than a modern-day Steinway or Yamaha.   The venerable German giant brought a powerful bloom to all four pieces but it struck me that Selby was tiring halfway through the Archduke finale, by about the point where the keyboard gets the sextuple shakes at bar 152 and keeps them going till arriving at bar 184.   For all that, you couldn’t fault the vivacity of the Presto conclusion, even if the victory impressed as hard-won.