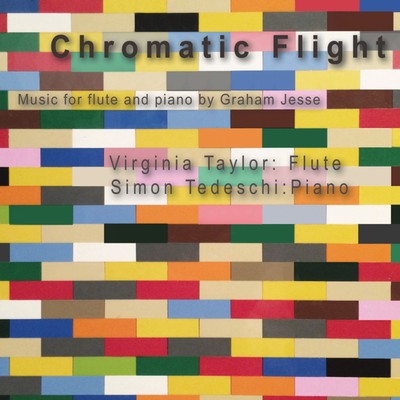 Here is a short disc of thoroughly amiable duets for flute and piano, unassuming music treated with consideration if not much flamboyance by a couple of distinguished Australian artists.   The contents comprise six individual pieces and two suites – one Latin, the other jazz.  The briefest track, Ripples, lasts 2:03 minutes; the longest, Contemplation, comes in at a second short of 5 minutes.

All works are products by Graham Jesse, a well-known Australian performer, composer and arranger whose life has revolved principally around jazz:  a biographical descriptor borne out by this album.   Taylor’s flute is the dominant thread throughout; Tedeschi has his moments of exposure but it remains clear in every track that the wind line is all-important.  Which doesn’t come as a surprise; most of the publicity shots I could find of Jesse have him holding a flute, concert or bass.

We’ve all been victims – willing or otherwise – of elevator music, that irritating or anaesthetising noise that fills out a vacuum in our shopping experience.  It could be a rendition of a well-known popular song or a hotted-up Christmas carol.  Its function – if it really has one – is as aural decor, acoustic tinsel, and often dismissable.  Sadly, I’ve never been in a lift where the sound system is burbling out Good King Wenceslas at which all of we transportees join in a verse or six.   Fortunately, Jesse’s music is original and rather individual, which removes it from the realm of material that just sits on the periphery of consciousness.

But I couldn’t help thinking of certain types of composition that have an assertively functional philosophy behind them.   Hindemith’s Gebrauchsmusik or music for utility is not the right fit for Jesse’s work in Chromatic Flight, even if you have to listen hard to find any moments where Taylor and Tedeschi have much to cope with as far as technical challenges go.   Yet there is a faint patina of the utilitarian about this CD’s content which is light and slight, for the most part.

As well, you might be struck by an echo of Satie’s Musique d’ameublement where the music is meant to be background, like wall-paper.  Stravinsky tells the story of the composer rushing round the room where this music was being performed, trying to get people to talk over, rather than listen attentively to, his work.

Mind you, that can work in reverse.  I remember being at a launch of something to do with chamber music at the Naval and Military Club where music was supplied by an ad hoc string quartet from the National Academy.   We were standing around on a terrace at the rear of the building, chatting amiably enough when Dame Elisabeth Murdoch  – whose money was probably funding the event – querulously demanded that we all be quiet and listen to the music, which could have been Haydn, or Paisiello, or Salieri but  was definitely in divertimento vein and not being accomplished with much concern beyond getting the notes right.  S till, the piper calls the tune, so the hard-liners among us who can distinguish between pap and prowess adjourned to the inner bar.

But, to the matter in hand, Jesse’s work tends to operate on an impressionistic level, evident in the first three titles recorded here.  Waves is really ripples with Tedeschi setting up an arpeggio ostinato – no, a splayed common chord base with some soothing meandering from both instruments.   These waves are gentle enough; even when the atmosphere gets a bit hectic in the work’s centre, there is nothing here to transport you from Elwood or Balmoral to Portsea back beach or Mona Vale on a stormy afternoon.

Flutter begins with a flute solo, punctuated by some – yes, flutter-tonguing.   Then, you settle down for a lot of repeated notes and patterns with the inevitable flutter as the main focus of action.   It’s a nicely calculated ‘effect’ piece with a neat suggestion of jazz in its elliptical central section.   Ripples is a faster Waves – at least for the flute which begins and stays in Debussyland with an arpeggiated 7th chord/almost whole-tone pattern meandering up and down with little required from the piano but dutiful chords and mirroring.

The CD’s title number is a non-confrontational  bagatelle with lots of chromatic  passage work but it’s not alarmingly atonal;  more along the lines of a modern-day Flight of the Bumble-Bee, speaking in easily digestible phrase-lengths with nothing spartan or confrontational along its journey towards a C Major final chord.  The pace in the outer thirds is fast yet the whole impresses this jaded mind as a fine AMEB study piece.  Convolution is similarly brisk, follows the same ternary pattern, also ends in C and takes a pattern of descending 4ths as its central building block.   Belying its title, the piece is clarity exemplified.

You’d want to be  more agile than most navel-gazers to find Contemplation useful.   It has no great incidents – quite properly  –  but an intriguing irregular rhythmic patter-line set up by the piano before the flute enters with a lucid melody that gives Taylor an opening to show her well-managed vibrato and security of articulation on sustained notes.  Much of Tedeschi’s part could be played by one hand, so that some consecutive chords at about the 3-minute mark come as a surprise.   Still, there’s nothing wrong with a bi-linear pattern gently wandering round a D tonality pivot to suggest something close to mental stasis – if that’s what you understand by contemplation, of course

A mild bossa nova rhythm is the only memorable factor in the first movement of the Latin Flute Suite with the prescriptive title of Bossa Flauto and there are some of those mild syncopations in the piano part to help you sway along the Brazilian dance path.  Silly Galoot, a slang term for flute, is a companion piece to the bossa nova gem and is one of the tracks that suggests to me most strikingly the landscape of Satie’s furniture music. Its more arresting moments come when both instruments play the same melody line in unison; much of the rest seems to me sprightly note-spinning with a clear lack of purpose starting about half-way through before the by-now-inevitable reprise of the piece’s opening material.   Savusavu celebrates a Fijian resort that Jesse visited and there found much the same inspiration as from bossa nova and the preceding galoot.  You can take little objection to this except where the players move into some uncomfortably situated triplets.   Nevertheless, in this piece the actual progress of the composition is very predictable.  To each his own, I suppose, but I’m puzzled as to why Jesse found a calypso rhythm gave the best reflection of his South Pacific island experience.

Jesse’s Jazz Flute Suite has three movements: Don This, Waltz and Flutist Blues.  The first is a tribute to 91-year-old jazz great Don Burrows and is a mildly swinging ramble with four places where both instruments play in unison. moments that certainly bring back memories of the Burrows Quartet and the MJQ’s influence on the art form in the middle of the last century, although this later product is low-key and short-breathed in its little paraphrases of Bach Inventions-type textures.  The Waltz is anything but: full of hemiolas at its opening before settling down for a moment, as if it prove that 3/4 is capable of more than you’d think.  It’s a placid rondo with a quiet interest, and probably not suited for dancing, but you could say the same about plenty of Chopin.   The concluding blues is an optimistic one with an attractive main melody and a clever sharing of the labour between these players; its only problem comes in an episode before the final reprise which sounds over-studied compared to the easy swagger of its surrounds.

You won’t find anything ground-breaking or unusual on this CD.  The performances are smooth, apart from a few moments of not-quite-synchronicity in the last three tracks. Bob Scott has achieved a fair balance between the players, Tedeschi’s work not being under-played and Taylor’s flute allowed a vivid amplitude without over-miking; you’re not conscious of chuffs or breathiness.  Indeed, the calm surface of the CD may go some way to explaining why I think it – or parts of it – may fit the afore-mentioned Satie performance conditions.