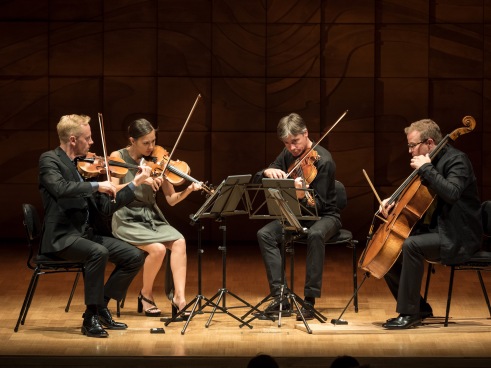 Introducing the last work on this subscription series recital from the ASQ, stand-in cellist Timo-Veikko Valve thanked his colleagues for programming a work from his own country: the Voces intimae String Quartet in D minor by Sibelius which is the Finnish composer’s outstanding contribution to chamber music.   Valve’s gesture was sincere, I’m sure, but not really necessary as this undertaking was the night’s highlight, largely due to a solid interpretative consensus from all concerned.

The regular ASQ members – violins Dale Barltrop and Francesca Hiew, viola Stephen King – contrived to weld Valve into their performing practice with pretty consistent success.    Replacing Sharon Grigoryan (absent on parental leave), the Australian Chamber Orchestra’s principal cellist made his presence all too obvious in the opening sentences of Haydn’s  Bird String Quartet Op. 33 No. 3 in C.   While Barltrop was finishing his 1st theme statement, Valve’s ascending C Major arpeggio was  pushed forward with excessive force; ditto for the D minor pattern repeat in bars 11-12.  A small thing but it drew attention to a balancing flaw that arose several times in this particular movement.

Unlike quite a few extant recorded performances, the ASQ followed Haydn’s repeat signs.  In the following Scherzando, Barltrop and Hiew produced a cogent, rustic version of the two-voice Trio; the only oddity came with Valve’s tendency to anticipate the others at some of the Allegretto‘s mid-paragraph cadences where the upper three players had pre-determined a small hesitation.   The group’s approach to the Adagio was anything but.   It sounded as though a communal decision had been taken to view these pages as a sort of minuet.   This might work for some of the score’s more obvious and simple stretches but leads to dismissiveness when the first violin encounters sextuplets and that benign flight of fancy lasting from bar 43 to bar 36.

Also dissimilar to several contemporary approaches, the ASQ eschewed the possibility of radically meddling with metre, sticking consistently to a regular pulse without extending hiatus points, this slow movement a case in point where the phrasing sounded collegial and the ensemble’s underlying impetus unshakeable, except for Barltrop’s solo interstitial breaks.   And the rondo-finale proved to be a deft gem, the lower voices of King and Valve not over-emphatic but then much of their work sits in their instruments’ middle ranges.  Haydn’s felicitous chains of parallel 3rds and 6ths look so simple on paper but translate into crisp and attractive passages of play, the actual sound more effervescent than you’d expect.   In realising this, the ASQ brought a much-appreciated verve to what is fast becoming a string quartet recital cliche:  the opening Haydn.

Swiss-born contemporary composer Helena Winkelman‘s Papa Haydn’s Parrot offers an 8-movement sequence of variants on parts of the Bird Quartet.  With admirable gusto, the ASQ gave this rapidly-moving score an outing, each segment staying around just long enough to make its point although the opening A Question of Character sounded over-strident in its content and unexpectedly four-square, with little I could make out of Haydn’s clever disturbance of equilibrium.

As the movements passed, Winkelman employed most of the modern-day production techniques for strings: harmonics in the second Menuet in Slow Motion, col legno, pizzicati all over the shop, microtones (if not simple glissandi) in At Ease (Adagio), and the insertion of sticks (knitting needles) for part of Memory of a Dance.  In fact, much of these devices came into clear prominence in the penultimate Rondo in Presence of Fleas where Winkelman wrong-noted Haydn’s finale to give us a musical image of 18th century wig-wearers’ cranial irritation.  This work’s finale, Haydn on the Rocks, intended to summon up a Big Band spectre through jazz-inspired flashy musical gestures; can’t say that it was convincing in its achievement because, no matter what instructions you give in Satiesque vein, it’s nigh impossible to convey the essential brassiness of a band by means of four strings, not even if you write a superfluity of slashing, sweeping chords.

That Haydn had a parrot is a historical fact; the animal survived its owner, who bought it 20 years before his death.   So he had at least one avian interest.  Winkelman seems to identify the parrot with the popular nickname of this quartet, even though the set from which it comes predates the parrot’s purchase by nearly a decade.  Not that it matters too much in this instance, where the work’s name doesn’t matter as much as its use of Haydn’s score which is probably more clever than it sounds after one hearing..

The Sibelius quartet needs to be played with unyielding intensity, at the least in both outer movements and that’s what we got from these players.  Barltrop and Valve led their colleagues into Sibelius’ passionate argument that dominates the opening Allegro; a demonstration of stern polyphony uninterrupted by circuit breakers which finds its resolution in a striking chorale across the final 12 bars.   After this, the A Major Vivace, packed with semiquaver patterns that interweave and contrast, made for a welcome refresher, here treated with a welcome amalgam of heft and dexterity rising to a bountiful C Major climax at Rehearsal Number 3 where the upper voices duet at the octave over a weltering support of double-stopped semiquavers – a splendidly invigorating bout over all too quickly.

This work’s core, its Adagio, produced the evening’s most dramatic and moving work from the ASQ, the interweaving syncopated labyrinth of melodies realised with eloquence and a laudable self-awareness on the part of each participant, notably at the two sets of chords, in E minor and C sharp minor, that earned this quartet its sobriquet: clear in their parts and enunciated triple-piano as required.   The pace is not demanding but the counterpoint is a consistent test of flexibility and abnegation to the greater cause. With controlled fervour, these musicians took us through these pages with consistent unanimity of purpose.

Sibelius prefigures the rustling activity of Tapiola in this work’s Allegretto where, after the hefty rustic measures that provide the main material, second violin and viola move into parallel quaver triplets to background the outer lines’ brief melody lines.  It’s a scherzo-of-sorts but the 16-bar stretto comes as a relief from the unabashed angularity and unsettling awkwardness of the movement’s development.  Finally, the concluding Allegro proved irresistible thanks to the ASQ’s clear articulation and head-long confidence that persisted in the abrupt shift to a higher gear at the Piu allegro with the upper three lines in unison urging the work’s pace forward for relentless pages of ferment, even in later segments where the dynamic markings accentuate softness and subterranean heaving until an apogee is reached – in case the players feel like wavering – at the Number 9 Sempre piu energico, the fabric punctuated by abrupt unison scale passages up and down.

With this piece, all the elements are provided for a tense involvement with the listener, Sibelius exerting a grip that doesn’t falter after the first movement.  The ASQ – even in this format, or possibly because of this format – produced an ardent, involving interpretation of a work that stretched them beyond the preceding Haydn-Winkelman double-bill.  It brings about the kind of experience that makes you more conscious than ever that there is no substitute for live performance; I don’t care how fine your sound-system, you cannot equal the excitement involved in watching musicians in the flesh grappling with an emotionally rich, dangerously vital score like this one.