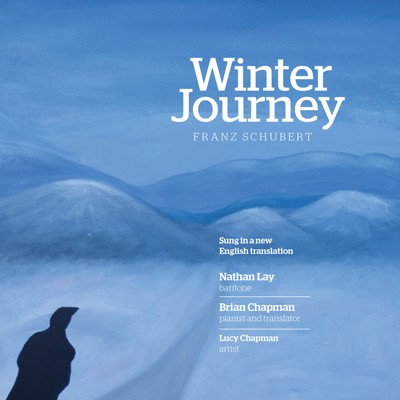 Here is a considerable undertaking.  Baritone Nathan Lay and pianist Brian Chapman have recorded Schubert’s superlative song-cycle in two languages, the English translations by Chapman himself.   As well, the CD booklet incorporates illustrations by the accompanist’s wife Lucy – one picture per lied, the art designated by its creator as Nature Surrealism.   About this aspect of the product, I feel incapable of offering any meaningful appraisal; any fool can see the obvious relationships between Muller’s poems and the artist’s works, especially if you consider the schizophrenic nature of the narrator’s self-descriptions.   As far as I can tell, Lucy Chapman is not attempting a profound delineation of each lied‘s emotional content but an illustration of each poem’s main features or dominant motives.  Enough of that; it certainly makes for a colourful booklet, even if you can carp at the artist’s personality-less depiction of Muller’s protagonist as a black silhouette (see the album’s cover above).

Lay is not a known quantity to me although his career should have brought him into view through his activities with Opera Australia, Victorian Opera and the Royal Melbourne Philharmonic.   But I can’t place him.   Chapman I’ve heard several times, mainly at the Organs of the Ballarat Goldfields Festival and on Louisa Hunter-Bradley’s CD of this very same Schubert cycle, released 14 years ago.

This Lay/Chapman enterprise has many attractions, the chief one being the excellent relationship between the artists which shows an unflagging empathy at work throughout both versions of the 24-part sequence.   You’d expect a note-perfect rendition of each page these days, given the powers of recording studios to mask technical flaws.   But you don’t expect to come across a consistent meeting of interpretative minds such as you find here.   Yes, there’s a temptation to put the credit for this at Chapman’s door, given his years of chamber music experience and status as a top-class accompanist.   But that would detract from the baritone’s clear, consistently lyrical line which, if it’s not at the rich timbral level of formidable male Schubert singers who graced the last century, is as satisfying and rewarding as comparable performances from his contemporaries in this country.

The English version starts impressively with a carefully measured reading of Gute Nacht, the interpretation melancholy, not doleful and gifted with some eloquent piano detail work in the interludes.   The following Die Wetterfahne speaks clearly enough, although the ritenuti and fermata points seems to be  weighty.   Gefror’ne Tranen comes across with similar lucidity, the climactic final line impressively determined as Schubert treats one of Muller’s wettest poems.  A certain gentlemanliness restricts the impact of Erstarrung which makes its points with a sort of polite vigour.   Then, Der Lindenbaum is a complete success, both performers carving a clear arc through the lied‘s narrative with a melting-moment resignation in the final sixth verse.

Chapman’s annotation for Wasserflut refers to the 1963 version by Pears and Britten where the interpreters ironed out the dotted-quaver-semiquaver pattern that permeates the song, breaking both voice and piano lines down to convenient and congruent triplets.   The controversy must have passed me by, although I’m sure it caused a sensation in Schubertian circles and apparently brought out the progressive in Alfred Brendel and the conservative in Gerald Moore.   On the English-language disc, Lay and Chapman opt for the Pears/Britten treatment; on the German one, the musicians perform the score as written.   Storm in a teacup?   Probably, unless you’re a stickler for the written word/note.

I once heard a young cellist from the Australian National Academy of Music proclaim in an eventually aimless, and therefore useless seminar that a composer’s score is really a palimpsest, with the obvious inference that an interpreter should have the right to do her/his best/worst, if necessary wiping the compositional slate clean.  It’s a hard question on which to pontificate but I must confess to being moved to fury territory by performances that play blurring tricks similar to the Pears/Britten example with Baroque and Classical works.   In this case, the song necessarily becomes less fraught emotionally in the last line of the even-numbered verses.  The only irritating factor was Chapman’s use of that translator’s admission of defeat: the word ‘perforce’.

For Auf dem Flusse, the duo presents another persuasive account with a steady growth from calm meditation to powerful declamation over one of the cycle’s more gripping piano parts.   Lay makes an impassioned business of Ruckblick, shaping the rapid-moving sentences with  a welcome lack of rigidity.  Another unexpected move comes from Chapman in the second-last bar where my edition brings the heretofore alternating chords together but the pianist maintains the disjunction that obtains throughout the rest of the piece.   The split character of Irrlicht, the composer deliberately tamping down the text’s possibilities, is handled with unexpected brightness, the usual dark-timbre colours not stuffed down your throat.  The ensuing version of Rast impresses for its intensity, although the last two lines are hard to grasp in this translation.

Two out of the three segments in Fruhlingstraum come off successfully; you might have expected more bite in the middle ‘crowing cockerels’ verses.   At the cycle’s half-way point, Einsamkeit continues the Werther-like self-absorption of poet and composer; in this particular song, Lay sounds remarkably convincing, his dynamic depth not extreme and his vocal personality suitably youthful.   I’d be the last to dismiss the narrator’s dejection as essentially adolescent – his blighted love is unassailably cogent and continuous.   But the Winterreise world is emphatically that of a young man, not a character full of years and experience.

A few cracks appear in Die Post, like some blurred chords in the softer accompaniment passages and a forced quality to the leap from C sharp to E in the second and third-last bars of the vocal line.   A touch more difficult to accept is Lay’s characterisation during  Der greise Kopf which sounded more like dismay than appalled self-recognition.   Both artists produce a satisfying reading of Die Krahe, the whole carried out with a calm anguish from the voice and an untroubled inevitability from the keyboard.

The collaboration again works to excellent effect in Letzte Hoffnung where the abrupt turns of mood come across without jarring, the short song rounded off with an insightful depiction of optimism rooted in despair.  The following Im Dorfe shows requisite spine, although Lay’s best passage comes with the retraction of defiance beginning at Je nun. Chapman holds little back in Der sturmische Morgen, crowding his singer out of the picture during the Und rote Feuerflammen stanza; mind you, there’s little room for Lay to achieve anything substantial  in this bold-speaking brevity.  You know, by the time the cycle reaches Tauschung that every suggestion of lilting happiness is an illusion but you’d be working hard to find a sign of it from these artists; an interlude without depth it seems here, not helped by Chapman’s use of the odd noun ‘perambulation’ in the admittedly awkward second half of the first quatrain.

Nearing the end, Schubert asks a good deal more of his interpreters.  Der Wegweiser taxes the singer with yet another steadily rhythmic set of phrases that gradually decrease in motion until a mournful full stop – a path that Lay invests with an appealing innocence that falls just short of the innate suggestions of dread.   During Das Wirtshaus, Chapman carries all before him with a fine account of the prelude, postlude and interpolations, each note in every chord sounding clearly and in balance. – which is not to ignore the baritone’s emphatic declamation over Schubert’s final lines.

The surge out of desolation that is projected in Mut! –  a pause in the poet’s downward spiral – appears as unwieldy in this reading as in most others, with its rousing school-song echoes; Lay and Chapman play a straight bat here, not looking for any biting irony.  In the concluding brace, Die Nebensonnen and Der Leiermann, musicians are presented with differing-but-similar visions: the first, symbolic regret; the second, a spiritual nihilism of extraordinary honesty.   Both enjoy exemplary airings, the last track of this English language CD an alternative version of Der Leiermann    Well, not that different:  Chapman simply omits the final resolving bar, leaving this Muller-Schubert enterprise hanging.

What of the German version?  Suddenly, we’re at home.   It’s not that you have to work hard to decipher Muller’s language  –  nobody would call it simple  –   but even a rudimentary knowledge of German enables you to glean clues all the way through.  Does the move back to original material change the cycle significantly?    Well, yes, it does.  For instance, Lay’s production doesn’t alter in his second-disc Gute Nacht, but the emphasis across phrases becomes more logical or appropriate, particularly in the major key move for the last stanza.    During Die Wetterfahne, the interpretation gains from an influx of initial plosives.  Erstarrung, too, becomes much more gripping and emotionally fraught in its later stretches.   Listening to the English disc, I noticed Chapman’s slight arpeggiations – no, disjunctions – at the start of some odd-numbered bars in his interludes for Der Lindenbaum; here, details like that and a punctilious observance of note-values are just as enriching to the lied‘s fabric the second time around.

The change brought about by working through Wasserflut as originally written is the establishment of a tension between voice and piano that makes the experience more aurally disturbing.   It also appears to add an aggressive undercurrent, while also seeming to slow down the tempo, although the booklet information has the German two seconds shorter than the English reading.    Indeed, the only noteworthy temporal discrepancies between the discs come with Einsamkeit which is longer in German and the cycle’s final Der Leiermann which is somewhat longer in German than in either of the English tracks.

Further on, I was again gripped by the passion of Ruckblick – a world of hurtling angst in such a brief space.   The triplet/dotted rhythm conflict that so exercised observers about Wasserflut is a bit of a moveable feast in Irrlicht: a peculiarity that I found in both discs.

Still not happy with Lay’s third leap at the end of Die Post but the second reading is, if anything, striking for Chapman’s genteel galloping.   More engrossing as a carefully considered interpretation is Letzte Hoffnung with a pliable but not over-distracting rubato applied in all sorts of places, regardless of the designated changes in tempo throughout this marvellous depiction of mutability in nature and the poet-musician’s spirits.    Even more in the original tongue, you can feel dissatisfied with Der sturmische Morgen for its light texture and those stretches where piano and vocal line progress in unison; a very moderate storm at work here until the  ego is inserted during the last couplet  –   another polite interpretation offered here as in the English disc.

A telling demonstration of the care taken in preparing this recording emerges in Der Wegweiser where Lay’s pauses for breath are finely gauged to make maximum sense of the poem’s scansion,  Chapman ever alert to the singer’s small-scale mobility.   The re-take of Mut! is resolute enough, but the vocal F Major arpeggio on the second sind wir selber Gotter! lacks ringing definition.   The baritone’s elegiac regret in Die Nebensonnen sounds even more striking here, and Der Leiermann walks a fine line between remoteness of observation and total self-identification, thanks to the pianist’s reserve and Lay’s capacity for muted plangency.

You’ll find much that satisfies in this double album, no matter whether you plump for total comprehension (Lay is admirably clear in both languages), or find it hard to hear old favourites in an unexpected garb, or are only content with readings as close to the original palimpsest as musicians can get.   No shocks await the listener on either disc and, even in the song-cycle’s less-inspired passages, Lay and Chapman’s well-crafted workmanship in performance is consistent and reliable.   It’s a most commendable exercise notable for its calm and unaffected reading of a lieder cornerstone.