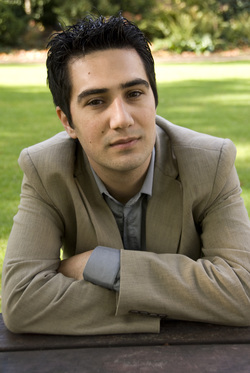 Most of my experiences with pianist Amir Farid have come about through his association with the Benaud Trio, which I assume has now become something of a phantom ensemble, rather than the Melbourne chamber music stalwart that it was for several years.   These days, violinist Lachlan Bramble and cellist Ewen Bramble hold senior positions with the Adelaide Symphony and Farid himself has moved his base of operations to New York.   True, performances of any kind are impossible/improbable given the current world situation but you’d have to anticipate that Benaud re-appearances are likely to be rare, even when the world returns to what we laughingly call ‘normal’.

In fact, Farid is a victim of COVID-19 as he is marooned here for the duration.  About which he shouldn’t be too unhappy because, if there’s one place you’d rather be than Andrew Cuomo’s New York, it’s Daniel Andrews’ Melbourne.   While he’s staying in the Victorian capital until he regains access to the only American city worth visiting, Adele Schonhardt and Christopher Howlett invited him onboard their digital vessel, for which he produced an hour’s worth of works by that remarkable husband-and-wife pair, Clara and Robert Schumann.

It was never going to be an equal occasion.   One of Europe’s greatest pianists and teachers, Clara Schumann also left behind a sizeable catalogue of compositions that contained mainly piano works and songs.   In recent times, certain artists have performed much of her music, although the only score that I’ve had much acquaintance with has been her G minor Piano Trio.   But, set alongside her husband’s early masterpiece, the opening quartet of pieces was outclasssed.

Farid opened his innings with Clara Schumann’s 4 Flüchtige Stücke, small bagatelles that were published in 1845.   None of these is a demanding work and Farid encountered few problems in handling them.   The first, a larghetto in F Major, followed simple ternary form with interest added here by the pianist’s liberal approach to rhythm and a gentle emotional prospect delivered with care and no theatricality.   In A minor, Un poco agitato came over with spirit, a few mishaps in the right hand minor distractions and the miniature probably given at a slower speed than it deserved.   A following Andante espressivo  in D Major might have gained character from greater emphasis on the un poco più animato direction that covers the middle segment.   A few missed notes in this central section’s G major flirtation surprised for their avoidability, but little details like the exposed E in the 8th last bar’s first dominant 7th chord showed a sensitivity to the composer’s chord placements that compensated for some digital slips.

Farid followed an approach in the odd-numbered pieces that favoured an arpeggiation of many chords, even if they didn’t need it for his comfort’s sake.   This reinforced the Mendelssohn-derived impression that all these pieces made of following straight on from the Songs Without Words.   That influence showed out clearly again in the concluding G Major Scherzo with its slightly elliptical opening sentence and the reading came to a satisfactory fruition in the last A tempo section which revealed some welcome panache.  You could admire the fluency of these short pieces and their emotional candour but none of them presented as striking; competent, amiable, agreable, unambitious and, now that we’ve heard them, we won’t gain much by hearing them again.

With Robert Schumann’s Carnaval, written less than a decade before Clara’s 4 Fugitive Pieces, you come into a new world of pianism where the inspiration is a mirror of the Romantic era through its tempestuousness, sparkling brilliance, hard-centred sentiment and catholicity of subjects and material.   Most commentators don’t give it top-ranking in the composer’s oeuvre for the piano and God knows there’s plenty of competition: the Symphonic Studies, Fantasie, Arabeske, Bunte Blätter, Kreisleriana, Album for the Young, Faschingsschwank aus Wien, not to mention the sonatas, so I won’t.

Despite its languid rilievo passages, this work is in a hurry, calculated to stir you, if not exactly rouse you to Hong-Kong-demonstration point.   So it strikes me that a great reading carries you along on a wave of enthusiasm, even if part of you sits back and finds the whole exercise slightly ludicrous as it leaps from one character sketch to another.   Farid gave a worthy account of this large-scale suite, giving us easy access to the composer’s portrait gallery peppered with associated dances.   If the overpowering authority of a fully informed interpretation came across only fitfully, this pianist gave cogent views of Schumann’s large landscape’s many components.

A brave attack on the Preamble showed Farid’s welcome mastery of the hefty chords that can clot this movement’s bold initial statement.    A few top-end errors blurred the first-time-through declamation but the  move to Animato came across without jarring, the concluding rush a persuasive entity.    You can’t do much with the Pierrot pages which I find laborious, chiefly for those predictable forte interpolations that close each four-bar phrase until their shape eventually takes over; here, they made for a necessary evil, just as they do every time I hear this score.   Harlequin is just as repetitive but has a more attractive framework and the only flaw I could hear in Farid’s light-hearted approach was his tendency to extend the right-hand semiquaver rests in each odd-numbered bar.

A clear-speaking Valse noble distinguished itself by an unexpected interest roused in the dance’s second longer half by some left-hand emphases.   Moving on, you could admire the legato finesse during those odd septuplet and quintuplet groupings in Eusebius which across its length maintained metrical regularity and didn’t turn into sludge.   The mirroring Florestan enjoyed a rugged attack which urged forwards and faltered only once, in the only octavo bar.    Farid might have improved his Coquette with a quicker speed to encourage a more flighty impression, but the Replique that smooths out the preceding whimsy came across neatly enough, despite a rather laboured conclusion.

Schumann’s Papillons is infamous for its sforzandi which have the disturbing faculty of turning the insects into gnats; I would have preferred a more feathery approach, despite Clara Schumann’s directions in my edition, particularly in the middle bars of alternating semiquaver duplets.   But the following Lettres dansantes could not be faulted for clarity and lively address.   Further, the waltzy-suggestiveness of Chiarina was sublimated while the performer’s octaves were close to perfect, the only problem an accentuated ritardando at the conclusion of the second part’s repeat.   In this version, Chopin was done proud with a surging sensitivity in the melody’s outline, only a single misplaced note in bar 2 of the repeat disturbing the peace.

Right-hand octaves dominate the Estrella movement, occurring in about three quarters of its length; nearly all of these came off in a realization of the page’s muzzled power.  The canon between top and bottom lines in the B Major Reconnaissance interlude came through with telling definition and the main A flat melody’s reprise was splendidly restrained despite an error in its 5th bar.   Fortunately, the more difficult presto Pantalon et Colombine movement was technically assured and an indication of this artist at his best under stress.   Similarly, Farid’s Valse allemande and its internal Paganini pages proved eloquent and fierce in turn; I was sorry my equipment didn’t capture the ppp connecting chord that leads into the Valse reprise.   But it was a real pleasure to come across a pianist who kept his head through the semiquaver’s worth of displacement in Schumann’s individualistic picture of the phenomenal violinist and to find a musician who didn’t make a meal of the left hand accents.

The spirit of Chopin infused the 24 bars of Aveu which found the interpreter injecting a healthy dose of rubato throughout, accompanied by a restrained dynamic range: a very private confession, then.   Subtlety infused the Promenade as well, the ‘small’ notes articulated with excellent reserve and the large-reach chords starting 22 bars from the end worked particularly well.

Then came the rush through Pause with an almost invisible blip in the third last bar, and we were into the anti-Philistine Davidsbündler Marche, Schumann’s anticipation of Moomba (I wish) and one which brought a willing response from Farid whose 9th-stretch right-hand chords made for enviable listening.   Like many a player before (and probably after) him, this executant found the going boggy in that stage where Schumann repeats his Theme du XVIIième  siècle in the bass.  But so much of this powerful grind-’em-into-the-dust finale was successful, Farid surfing across the various changes of scene with no pause for breath, climaxing in a rousing stretto.

It wasn’t the Carnaval of your dreams, probably because the performer took the whole thing very seriously.   Much was made before and after this reading of Schumann’s intention to depict a party, which is quite right.   But it’s not meant to be a bierfest; rather, a congregation of high spirits and no little wit.   Even that concluding march-waltz shouldn’t sound as though it belongs in a Munich hofbräu but has to glitter, if not necessarily be gay.   For all that, Farid came to the centre of the composer’s world much more often than he missed it: a fine accomplishment with great promise –  surprisingly, one of the very few times I’ve heard this artist play solo.