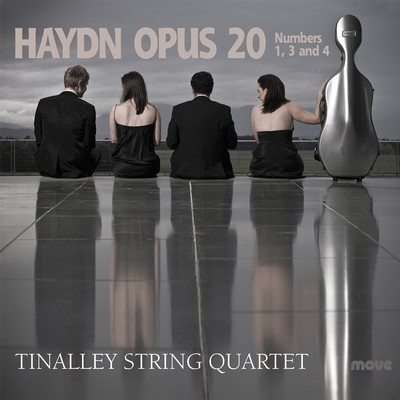 We’ve enjoyed a lot of Haydn over the past few years; the Melbourne Festival saw to that. For reasons beyond guessing, the complete string quartets were reviewed   –  by visiting ensembles who generally fitted in some Haydn among other works, as well as local groups taking up the challenge.   Any slack fell to students from the Australian National Academy of Music who lustily joined in the binge.   Not that the composer has suffered from so much neglect that he had to be resuscitated; you find that one of the quartets occupies pride of first place at many a chamber music event – sometimes being treated as a warm-up, on more reputable occasions handled with as much care as the executants give to their Beethoven or Shostakovich.

The Tinalley group has been constant in personnel for some years now: violins Adam Chalabi and Lerida Delbridge, viola Justin Williams, cello Michelle Wood.   At the same time as the members have taken up career positions – Chalabi at the University of Queensland, Delbridge and Williams with the Sydney Symphony Orchestra, Wood with the Melbourne Symphony Orchestra – their performances here have decreased markedly in number, cut back this year to  a two-program series at the Recital Centre.   Certainly, the group performs at festivals throughout the year – Perth, McLaren Vale, Townsville, Bellingen, and a few oncers from Albany to Mount Macedon – but, as a matter of necessity, these musicians’ time together is limited.

So this CD of half the Op. 20 quartets – Nos. 1, 3 and 4 – is a welcome opportunity to hear the players in well-seasoned shape.  The works make an excellent exercise in contrasts of all kinds – texture, developmental processes, harmonic elisions and jumps, rhythmic surprises, allocation of responsibility.   More surprisingly, the start of each opus number presents a contrast in ensemble colour; it’s as though the players have re-thought their style of attack each time they take on one of these ground-breaking quartets.

During the first movement exposition of the D Major No. 4, you are taken immediately by the controlled volatility of the triplets in Chalabi’s line, as well as by the finely proportioned weighting of the playing, which obtains also through the following set of variations where the supporting roles remain part of the fabric rather than fading into quiescence.   But the gem in this work comes in the plainest-looking writing: the Menuet alla Zingarese with its clever off-centre shape: gypsy music of real character, and treated with controlled elation, notably when Wood takes the lead in the movement’s Trio.  And the work is finished off in exemplary fashion with a smart-as-paint Presto, distinguished by faultless duet work, deft dovetailing across all lines and as crisp a delivery of the pages’ frequent dotted quaver-semiquaver-crotchet rhythmic motif as you are likely to hear.

The No. 1 in E flat is a more galant creation at its opening, more curvaceous in its anatomy than its plain-speaking D Major companion.  Here the Tinalleys give another extended example of their craft with the Affetuoso e sostenuto‘s mezza voce delivery, packed with subtle variation in delivery while giving the impression of seamless uniformity of dynamic, while still giving the work’s fluid motion a few mild sforzando accents where required.   Another crisp Presto ends the performance, notable for the evenness of Chalabi’s syncopations and the interpolation of subtle touches like the slightest of rallentandi at bars 148-9 to give a tonal and metrical relief just before the placid last phrases.

To round out the disc, the Tinalleys have chosen No. 3 in G minor, which begins with unexpectedly asymmetric melodic lines – well, they don’t last as long as they should in a perfect world.   Here, the details are lavishly spread around, like Williams’ semiquaver/trills from bars 41 to 44, brisk without being flurried and mirrored with panache by Delbridge 80 bars further along.   The following Allegretto features phrases of odd lengths but these players pronounce them with a dissembling persuasiveness so that you have to listen hard to realise that Haydn has inserted extra bars.   An arresting event comes close to the start of the Poco adagio where the three upper strings sustain  viol-like chords while Wood outlines semiquaver commentary for ten luminous bars.   It somehow suggests stasis and motion simultaneously and is only one of the praiseworthy passages in this set of pages – for me, the outstanding track on the CD.    The finale is dominated by Chalabi, but you also get to admire again partnership passages of high quality between the two violins and the Williams/Wood collaboration.

Every so often, Haydn inserts a unison, a sort of semi-colon in the narrative.   These musicians handle such tests without flinching and the sympathetic resonances that result speak volumes for their precision.    Of course, these are obvious instances of successful synchronicity and you can find finer instances when the texture becomes more complex in the first movement development sections of all three quartets.   The members maintain a lucidity in their work: no overstatement, no milking a phrase for sentiment, no step off the rational and civilized path that Haydn set down in these light-filled scores.   All we need now is for the Tinalleys to complete the opus with another CD of this excellent standard.