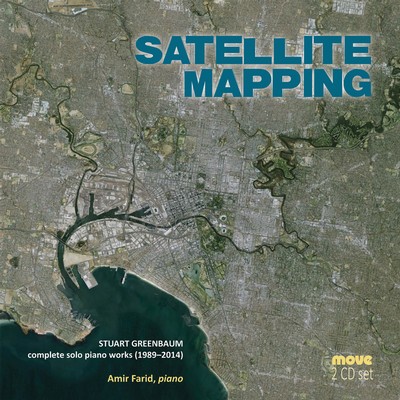 Released this year, here are the complete works for piano solo by Melbourne composer Stuart Greenbaum,a luminary of the University of Melbourne’s Faculty of Music and a writer whose name is continually before the public.  In his 50th year, Greenbaum’s retrospective is being observed by pianist Amir Farid, one of the Benaud Trio musicians and a highly esteemed contributor to this city’s cultural life.   While this retrospective takes up a double CD, much of the music it contains is brief in length, and every so often slight in character.   Yet, because of the composer’s absorption of a wealth of influences from the serious and popular fields, his work has a consistent attractiveness, not afraid to show an inner emotional world that appeals across the potential spectrum of listeners, from those aware of musical developments over the past half-century to others who eschew background for straight-talking  –  not that these groups necessarily exclude each other.

The album follows the development of Greenbaum’s craft in temporal order, starting with the 1991 Portrait and Blues Hymn, recorded some time ago by Michael Kieran Harvey.   Farid’s handling of this miniature displays some basic elements in the composer’s style: a penchant for pauses, a grounding repetition of phrases with varying harmonic-block underpinning (or not), progressions straight from a jazz player’s vocabulary, an easily digestible formal lay-out.   It’s a birthday-celebration piece but its title eludes any definite interpretation.

One of the recording’s major works, Ice Man, follows.  Among the more impressive and sustained products in Greenbaum’s output, this three-movement set of meditations refers to  extracts from Andrew Scott’s Lost in the Himalayas memoir, which details the Australian doctor’s celebrated 43-day ordeal in 1991.   The first (and shortest)  part – Lost| The Moon | Don’t leave me here – presents an atmospherically quiescent sound scape that suggests a detached despair, erupting into a short blast of vehemence before returning to the prevailing placidity.   Picture of an anorexic |Dignity | The dream continues the prevailing pointillist writing style, projecting sound pictures of a landscape where nothing happens in the physical surroundings; only the sufferer’s mind has active flashes that fade to silence or lead to obsession, denoted by repeated chords, a series of arpeggiated or broken sequences that grow slightly by accretion.   But, over all, the  music speaks of isolation, even when Scott’s dream of addressing his family brings about a passage of relative magniloquence.   But in the end the activity dies away to a single repeated note, like a drop wearing away stone.

For the last movement, They must have seen me | Faint voices | Affinity,  the atmosphere changes from meditative to flurries of action, although Greenbaum returns to the passive mode when the excitement of a possible sighting by helicopter dissipates.  Not that the composer is following a script, but it is difficult not to project your own narrative for piano writing that is, at its core, pictorial/impressionist.   Common chords over an oscillating D octave pedal propose a return to humankind and the movement ends with a kind of reconciliation, Scott’s affinity being with the rock that sheltered him and his acceptance of the Himalayas’ beauty, despite their innate menace.  Farid outlines this work’s slow-paced poetry with a high sympathy, giving each gesture plenty of space and maintaining a steady pace through to its consolatory final bars.

Innocence (in Stillness) was written for a birth and may be familiar to some pianists from the AMEB Grade 2 syllabus; a melody punctuated by some simple bass notes and chords, it’s over before you know it.   Looking to the Future, composed as a theme for a play concerning the 1989 Newcastle earthquake, states a bluesy theme several times, then stops on a middle-instrument question – a real bagatelle.   From 1996 comes one of the composer’s more well-known pieces, But I Want the Harmonica which, in some ways, bears traces of the preceding two scraps.   Again, the work follows a clear path, its motivic  repetition sufficiently varied to sustain interest as a descending sequence of two-note gruppetti enjoys multiple accompanying variants with a heavy jazz colour at its high point.   This work exemplifies Greenbaum’s individual vein of melancholy not taking itself too seriously as he recalls with open-hearted benignity a childhood school experience that meant much to him.

The first CD ends with three pieces that cover ground similar to that already covered.  New Roads, Old Destinations attempts to illustrate an Escher drawing, one of those trade-mark building designs where stairs ascend and descend simultaneously.  Chords follow a downward path round a central ostinato, either inside the harmonic progression that forms the piece’s material, or below it.   The structure plays neatly with the concept of nothing changing except superficially; as in the Escher drawing, the actual lines remain the same, no matter how you perceive them.   First Light’s four-note basic motive offers a sort of reflection of the previous piece, the motion being upward over a central-keyboard ostinato.   And again, the added-note chords, even the modulations, are reminiscent of a soft-edged Shearing-style improvisation that rises to a powerful C sharp Major conclusion – yet  the almost inevitable, unsettling distant high notes that conclude the work offer a coda of quiet negation, or at least a question-mark.   At about half the length of the other two pieces in this concluding triptych, Fragments of Gratification presents an evanescent meditation on one, possibly two, themes which rises to a brief dynamic high-point at about 1:40 but its true air-space tenancy is coloured in soft pastels.   Composed on the last day of the previous millennium, it eschews hoo-rah celebration for a gently rueful anticipation.

Disc 2 begins with Equator Loops, a set of variations radiating our from a central D; this is one of the few points on either of these discs where Greenbaum asks for unabashed virtuosic playing, the concluding loops in particular wide-ranging and aggressive.  Three Optical Allusions presents as a short suite dealing with musical representations of a solar eclipse, a time-lapse photograph and a Mobius strip.  It is hard to avoid impressions during the second of these, a gradually expanded rising phrase over a fixed bass pattern, of hearing something like  organized doodling, while the third offers little more, except louder.

Four Thoughts remain in the same compositional continuum.  The End of Winter oscillates between two short phrases; For Oliver offers a touch more interest in its change-ringing on simple, if rhythmically varied melodic matter; the Escher(again) inspired Spirals moves into some interesting, almost adventurous territory after a somewhat numbing first half; Bagatelle for Aksel kept its mystery – it is based on a children’s song – until near its ending, but it brought to your attention how surprisingly orthodox is Greenbaum’s underpinning tonality.

Glen Riddle recorded The 4th Saturday in April among a slew of Greenbaum occasional pieces two years ago, and Farid brings an equal gift of placid serenity to this wedding gift for a wedding that Greenbaum could not attend.   Evocation of 2006 sits as a kind of memento mori concerning one of Greenbaum’s students who died young; the Albeniz connection is a vague one, although the ostinato has some congruence with a permeating figure in the Spaniard’s piece.   And the composer’s avoidance of the anticipated in his disposition of the descending five-note scale pattern in the work’s last third is masterly.

Written for the birth of the composer’s daughter, Lavender for Hanna presents some quick variations on the British folk-song Lavender’s Blue; another miniature that is over very quickly.   More substance comes in Allusion, Introspection and Ascension which uses well-established piano masterpieces as springboards.  The first takes part of Chopin’s Barcarolle and  superimposes a structure that oscillates between the chromatic versatility of the original and a patch of 1930s-era syncopation that brings the piece to a close in medias res. Introspection extracts certain chord progressions from the finale to Schubert’s last B flat Major Sonata, but does not do very much with them; it’s as though the original is too self-sufficient to need much treatment – which rather defeats the purpose of the exercise.   The middle one of Liszt’s Petrarch Sonnets generates an exciting outburst in the last Ascension piece, even if the referrents are difficult to decipher until Greenbaum offers some literal quotes; Farid here provides a resonant interpretation of a piece that maintains its virtuosic roots.

The CD’s title work begins sparely before slowly passing to a roiling across-the-keyboard melange: an exercise in depicting the overwhelming detail that emerges as you hit the plus indicator on your Google map image.  It’s an ingenious concept – the gradual crescendo in information – yet it completes its work pretty rapidly; rather like the impatience most of us show when using a satellite map.   The CD ends with Fanfare for Elizabeth: not a royalist tribute but a piece written for the 80th birthday of Greenbaum’s mother.   It uses an optimistic rising four-note trumpeter’s motive but does not modulate outside its  A Major framework; still, it’s emphatically a celebration, an occasion for jubilation, and a suitable conclusion to this lengthy remembrance of things past.

On the composer’s website, you can find analyses of some of the pieces on these discs, viz. First Light and two parts of the Ice Man set.  See http://www.stuartgreenbaum.com