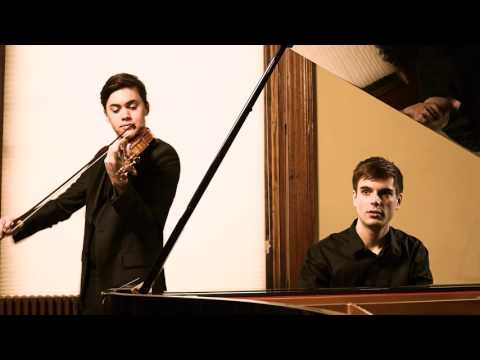 The second-last set of guests for Musica Viva’s subscription series recitals this year are better-known as individual achievers, prize-winners at competitions for their instruments, rather than as chamber music laureates.  In fact, as far as I can see, their association with each other, as opposed to their relationships with other duo artists, is of pretty recent origin: an all-Mozart recital at the Louvre in March which included the Violin Sonata in A Major K 526, as on Saturday’s program; another at Wigmore Hall on July 10 where they played the Janacek Sonata.

The other elements in their Australian tour are a new work by Australian-born, Glasgow resident Jane Stanley, Cerulean Orbits (in two sources, her first name has been re-gender-assigned to ‘John’), and the Saint-Saens Violin Sonata No. 1.   By the time they reached Melbourne’s Elisabeth Murdoch Hall, the pair had negotiated these four works ten times in a 17-day stretch crisscrossing the country, which must have given them a remarkably concentrated opportunity to hone their interpretations; the final performance should be a gem.  After which, I’d assume, they’d be happy to give these scores a rest for quite a few months.

Meanwhile, we reap the benefits.  The Mozart proved to be a polished, well-synchronised performance; in fact, a standard-setter for the rest of the night.  In the first Molto allegro, Tyson’s touch was lapidary-refined, each note slotted into position with singular craft, while his Presto finale could hardly be bettered for fleetness of finger-work.  Benjamin Beilman allowed his partner to set the running, coming into prominence where required, but the reading as a whole favoured the keyboard’s output, although honours were split more evenly in the middle Andante with its unsettling, plain-speaking octave doubling passages.  A different perception of the piece to your classic Szeryng/Haebler delineation but shaped  – no, honed  –  to a very high standard.

The tables weren’t quite reversed for the Janacek work.  Long in gestation and even longer in revision, the sonata shares problems equally as both instruments cope with its alternating bursts of spasmodic interjections and short-winded tunefulness bordering on the folksy.   Here, Beilman enjoyed more exposure, even if Andrew Tyson’s percussive explosions sometimes drowned his pizzicato doubling, or later his rapid downward scales in bars 2 and 4 of the third movement Allegretto.   But both musicians were intent on communicating the essential bite of Janacek’s writing where even a simple lyric like the second movement Ballada can’t be relied on to remain lyrically plain; or harmonically definite: just as you think you’re happily in E Major, the menace of C sharp minor wins out at the end.   This segment of the work impressed most because of the affecting embrace by both executants of the composer’s restless, unapologetic sentiment.

While Tyson dealt forcefully with the irrepressible jagged rhythmic patterns and complex trills that dominate the piano’s content in both of the first two movements and that return at the finale’s climax, Beilman brought a persuasive warmth to the Poco mosso section of the final Adagio, capped later with a rasping glow at the Maestoso G-string melody that rises to a weltering high B flat before the sonata ends in whispers and tight-lipped depression.  The players maintained tension throughout this work, taking their time over its relieving interludes so as to more effectively set up the following frenetic action.

Jane Stanley’s work was introduced by Tyson with an admirably fluent pre-performance address which went as far as possible, in the time allocated, to unveil some of the orbital mysteries.   This new score’s progress seemed to hold little meat beyond a series of timbral and rhythmic patterns or motifs, complete with sparse passing quarter-tones for Beilman and punctuating chordal splodges from Tyson.  Any suggestive extra-terrestrial images came from some high, ethereally calm passages for violin, while the arrival of space-junk generated a patch of twitchy, if not temperamentally refractory, playing  –  to my mind, the short piece’s most arresting moment.

In the Saint-Saens D minor Sonata, the players found performance gold.   Like a fair amount of the composer’s work that I know, the requisite virtuosity isn’t that demanding on fingers being urged to negotiate hard-to-manage chords and positions, but more reliant on the musicians’ response rate, which has to be lightning-fast.   Beilman and Tyson were note-perfect, as far as I could tell, and easily at home with the composer’s flamboyant style.   Just as in the preceding works, if more noticeably here, their collegial phrasing, agreement on points d’appui, interdependence in spots of rapid execution  (like the helter-skelter doubling – really, tripling – that breaks out about 12 bars before the final Animato indication in the Allegro molto) informed a reading of striking efficiency and brio.

Yes, the sonata is an intrinsically flashy piece, one that draws attention to its own brilliance and that of its interpreters – as in the central section of the Adagio which is flattering for everybody involved – or when it gets stuck in  bar after bar of light-hearted repetition (see the third movement’s change of key to E flat).  For all that, it suited Beilman and Tyson exceptionally well, allowing them to give free rein to their executive skill and high-powered temperament.  Here’s hoping their future performances together gain in interpretative depth because this set of four works demonstrated to a high degree their matched abilities and capacity for concentration and the impressive results that come from simple hard work.

This program is repeated on Tuesday October 25 at 7 pm.