THE TIME TRAVELLER AND HIS MUSE 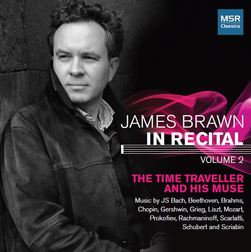 This is a double CD which contains a plethora of pieces that, over my time listening to recitals, many pianists have used as encores.   Brawn travels across time indeed – starting with Scarlatti and Bach, then finishing up with Prokofiev and Gershwin.   He follows a scrupulous chronology, ensuring that Chopin (born 1810) comes before Liszt (1811), and keeps Scriabin ahead of Rachmaninoff, the mystic born a year earlier than the great pianist-expatriate.

There are a few carry-overs from Brawn’s first In Recital (MS 1501) volume; he has different interpretations of the first Prelude from Bach’s Well-Tempered Clavier, the third of Liszt’s Consolations, and the Prelude in B minor from the Op. 32 set by Rachmaninov.   As grounding comparisons, he accompanies the Bach re-examination with four other preludes from the same Book 1, and fits the re-cycled Rachmaninov inside a context of four disparate preludes.   A pity that the Liszt remains alone here, especially when Brawn showed his talent with this composer by way of an expert Mephisto Waltz No. 1 in the previous album.

The time difference is not too important in the Bach interpretations: the earlier 1:58, the later one 1:49.   It’s a bit more telling with Brawn’s B minor Rachmaninov where 5:57 changes to a racier 5:03.   And the Consolation moves from 5:24 to 4:11   –  a substantial change of approach; well, a more purposeful performance, you could say.

Disc 1 opens with two well-known Scarlatti sonatas: the E Major K. 380, and C Major K. 159.  The first enjoys a crisp airing with a fair swag of detached notes in the right-hand scale passages and the trills and ornaments are neatly inserted, the pianist saving his powder for the B Major climax in the second half.   Much the same applies to La caccia where the dynamics are more engaging than on many another disc: not just through juxtapositions of piano and forte, but a clever gradation across the central segments of each half  –  impressive in illuminating this simple-speaking bagatelle.

After the C Major Bach prelude, Brawn offers the C minor, D Major, E flat minor and E Major ones; fine, although I would have been more satisfied if a few fugues had been added.   Nevertheless, the D Major piece is articulated with precision and, as with its predecessor, projects a gentle flamboyance in the final bars where the motor-rhythm stops for a mini-cadenza flourish or two.   Brawn  makes no attempt at emotional dryness with the sarabande-like E flat work, using his instrument to give the two pages a romantic sensibility but without sustaining-pedal washes.  Still, the finest in this set comes at the end with an urbane rendering of the E Major invention, given with grace and a non-insistent metrical regularity; here, most of all, you would have welcomed the complementary fugue as a sprightly consequent to this prelude’s amiable gentility.

Mozart is dispatched with the Rondo alla turca and the D minor Fantasia.   Even with the first work’s over-familiar pages, Brawn maintains an interestingly light texture, especially when the janissaries are in full A Major flight.   Also particularly worthy of note are his left-hand arpeggios: brisk, not over-loud, appropriately suggestive of elegantly civilized drum fusillades.   He keeps the longer work measured, infusing the opening Andante with a muted emotional detachment which obtains even in the piece’s three cadenza bars where the approach is deliberate, eschewing the temptation to turn their swooping scales into leaps of legerdemain.   The result of this approach is to push the dramatic balance to the score’s front, the D Major Allegretto properly a relief of tension but something of an addendum.

Beethoven’s Fur Elise Bagatelle makes a fair space-filler, but the stretto from bar 61 to about bar 83 showed a nicely contrived mini-climax in what remains a sweet but insubstantial set of pages that lives up to its descriptor.   Schubert’s F minor Moment musical, the jog-trot No. 3, raises no eyebrows, nor does the G flat Impromptu, even if you could quibble with a few leaning-post moments where the regular sextuplet/triplet underlying figure is slackened – you understand why, but not necessarily the places where this rubato is brought into play.

Brawn presents seven Chopin pieces: three preludes and four etudes.  The E minor Prelude from Op. 28 makes a soulful introduction to Brawn’s approach to this supreme piano composer; the left hand is allowed to speak distinctly, where other interpreters muffle its repeated chords.   The sweep of the final Op. 25 Etude was well-maintained, this reading favouring the first accent of every tempestuous bar, which is probably wiser than treating its progress as 2/4 rather than 4/4.   With the E Major No. 3 from the Op. 10 Etudes, Brawn relished the fierce central pages where the mood changes from nocturnal to the heft and plosiveness of a polonaise; again, some over-sensitive pauses/hesitations emerged in the main theme’s reprise.

A shapely version of the Op. 25 A flat Aeolian Harp Etude accounts very well for yet another encore standard, capped by an attractive concluding four bars of arpeggios that actually make you think the work’s nickname might be appropriate.   Brawn ends his first disc with the Black Key G flat Major from Op. 10; it’s very vigorous, handles the right-hand trickiness with plenty of brio and only a few notes fail to carry.   Some chords in the bass are pretty emphatic at several points but the interpretation succeeds for its appealing bounce and well-judged tightening and loosening of the initial rhythmic juggernaut, sprightly though it is.

Disc 2 opens with the Op. 28 Raindrop Prelude in D flat, one of the lengthier pieces among the 24 in Chopin’s publication and very well-known in its own right.   Brawn does the right thing by sticking with his opening tempo into the central C sharp minor segment and doesn’t over-egg the two high-points in G sharp.   Concluding this bracket is a real rarity, both in actual programs and as encore fodder: the Op. 45 Prelude in C sharp minor.  Here is a persuasive account of a harmonic tongue-twister that the performer welds into a coherent whole without a trace of unnecessary theatrics or manipulation; indeed, this version is spartan in its lack of introduced ornament or colour-adding arpeggiations.

The Liszt Consolation No. 3 follows, the left hand susurrus generally more rapid than in the previous recording and with less time allowed for labouring over the melody.   Is the quickened pace an improvement?   Maybe.   But if anything sums up the sort of thing a fagged-out concerto soloist would like to treat adoring fans to as a goodnight gesture, this is it.   Of the Brahms Op. 39 Waltzes, we hear the penultimate and popular-favourite one in A flat Major; not too slow and not too light, especially when the triplets start in the reprise.   A more moving depth comes in the composer’s A Major Intermezzo from the Op. 118 Klavierstucke where Brawn spares us any muddy thickness, relying on the piece’s inbuilt phrasing, simply following where the composer leads, which is both honest and refreshing.

Grieg’s 23-bar-long Arietta that introduces the Lyric Pieces Op. 12 raises few ripples, apart from its cadential disruption of the composer’s habitual two-bar sequences/patterns.   Scriabin’s C sharp minor Etude is an AMEB staple, a fusion of Chopin and Rachmaninov, capping off a sequence of seven tracks that are a collective corner of temperamental reserve in this album.   Speaking of Rachmaninov, Brawn begins his tour with the famous C sharp minor Op. 3 Prelude, the one that composer wound up loathing.   Matters are fine up to the Agitato which Brawn takes fast to begin with and ups the ante so that the section loses balance  –  no, evenness  –  between the hands.

The G sharp minor Prelude, penultimate in the Op. 32, works much better through a dexterous recovery rate and a pliancy of metre.   The B minor No. 10 from that same set is exceptionally well accomplished, packed with telling details like  the three bars leading into the L’istesso tempo pages – a model of taut deceleration in atmosphere – and the gentle delivery of chords in the final twelve gloomy bars.   Listen to the restatement of the main theme in the following Op. 23 D Major where the action is in the alto line for a sample of digital skill and reliability; or the change in intensity at the move back to the major in the Op. 32 G Major’s last a tempo marking – simple yet striking, even in a moment of harmonic relief.

To finish, Brawn plays Prokofiev and Gershwin.   The Russian composer’s Toccata makes a striking encore but it’s exhausting; not that this puts off some players who can’t get enough of performing time.   This reading has a heart-in-mouth climax, the three bars of right hand octaves thrilling to hear; still, I would have liked the motor rhythm sustained without a break until the rallentando marking is reached.   I Got Rhythm in transcription (by Gershwin? Suppose so) is a 90-second flourish which raises the spectre of both the composer and Oscar Levant with its clever harmonic shifts and progressions.

You get a lot for your money in this demonstration of the keyboard’s historical progression; some fine interpretations are peppered throughout both discs.  Of course, you might carp (as I have) about some of Brawn’s readings but even the questionable tracks are some steps above the everyday that you hear regularly.  It’s an enterprising and entertaining trip that this gifted pianist takes you on and, if you meet a fair few familiar faces along the way, so much the better for the encounter’s informed nature.