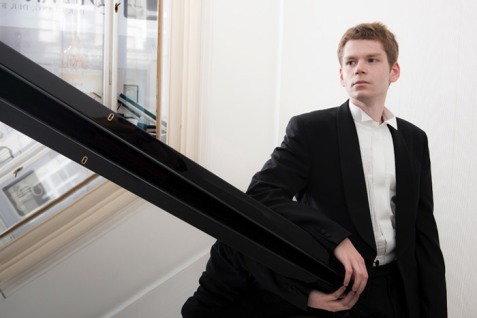 Coming to the end of a packed cross-country tour that would cripple most performers, the Sydney International Piano Competition winner for 2016 made his solitary Melbourne appearance at a lavishly appointed auditorium in the city’s private school eastern suburbs belt.   Camberwell Boys Grammar has enjoyed a building acceleration over the past few decades and its Performing Arts Centre auditorium holds a grandiose attractiveness, including an imposing front-of-house space, fairly comfortable conditions for its audiences, and a wide stage which, for this event, had a reflecting screen behind the performer – the sort of thing you see at Selby & Friends recitals or pretty much everything at the Australian National Academy of Music.

The hall also boasts a thick carpet that covers the foyer steps and the interior, with an emasculating loss of resonance as a consequence.  Not that you can do much else in an environment where schoolboys are the natural inhabitants, along with their innate propensities for noise-making.  Not only did Gugnin have to make allowances for a muffling acoustic, but also he was saddled with an uneven instrument –  a Fazioli grand?  –   that showed at its best in this night’s action-packed second half rather than in the staid Bach-and-Schubert opening gambits where the player’s softer passages held little textural interest.  A pity that we couldn’t have heard the school’s own Steinway, but then that company wasn’t sponsoring this tour.

Tuesday found Gugnin working through the larger of the two programs he has been taking on tour, opening with the Bach Adagio in G Major, a transcription for keyboard of the first movement from the composer’s C Major Sonata for solo violin.  This is a worthy settling-down piece, two pages’ worth of little activity that winds up on a dominant chord which took this particular audience by surprise, so that Gugnin was able to move without a ripple into the Schubert D Major Sonata.

Despite the handicap of his operating conditions, the prize-winner made a good deal out of this experience.  He followed an individual path across all four movements, finding a satisfying dynamic interplay across the score by refraining from the over-histrionic, so that the outer movements came across as restrained in temperament, more consistent in atmosphere than you usually hear from young interpreters.  For instance, the usual shift at the Un poco piu lento passages conveyed its message by relying on the modulatory jump in each case, rather than by confronting the listener with a pounding fortissimo.

For the concluding Rondo, Gugnin demonstrated a welcome insight, keeping the temperature low even when the movement reached its higher stages of ferment – the long central G Major episode – and not making a meal of the juxtaposed changes in dynamic enunciation.  Just as impressive work came at the final pages when the composer decorates his perky theme with chains of irrepressible semiquavers, right up to the simple, moving last three bars.   Gugnin showed his grasp of this movement, one that pivots on a touching combination of fluency and unaffected charm, a duality you find in the countryside Schubert, his personality not over-awed by his great contemporary.

Certain sections of the central Con moto pages were carried out with fine control, but here the instrument/hall combination made itself most prominent.  Both opening and closing passages are muted and the pianist was unable to give them room to breathe as his sound deteriorated quickly.  The action-packed middle section fared a good deal better, treated with an impressive impetus but – a trademark of this reading – not hammered home in the two-hands full chord punctuating exclamations.  If Gugnin reserved his power for the Allegro vivace, you could understand why: the scherzo itself has a remarkable buoyancy that surges out at the double-bar half-way through where the pianist blazed into action, pulling back for the simplicity of the movement’s trio, giving here an object lesson in maintaining a melody’s distinctive path over a relentlessly full chordal support.

The night’s second half was almost completely all-Russian, beginning with Shostakovich’s Sonata No. 1 of 1926, a highly impressive piece that is rarely heard because of its relentless physical demands and the unremitting percussive dissonance of its processes.  Here, Gugnin exploded into action with a fierce energy that made a brilliant apologia for a score basically unconcerned with its own portability, one of the young composer’s works that shows no signs of the orthodoxy of coming decades.

Michael Kieran Harvey featured as the odd man out in this recital’s second half, his G-Spot Tornado making a welcome appearance.  Extracted from the Australian composer/pianist’s 48 Fugues for Frank Zappa (which is, in fact, nothing of the sort), the piece is, after a portentous opening apostrophe, a moto perpetuo conceived as a dazzling and brilliantly conceived homage to Zappa’s original.  Gugnin made an excellent business of this toccata, at ease with its syncopations and the simple melody that flashes across the hectic, unstoppable accompaniment.  Although it lacked something of Harvey’s own flamboyance, this version sustained its interpretative grip and burbling effervescence.

Leonid Desyatnikov is not a name that you come across often, if at all.  Born in the Ukraine, he made his name as a film-music composer, then moved to the opera stage and theatre, providing a wealth of incidental music.  Gugnin presented his Reminiscences of the Theatre, seven characteristic pieces that could have come from any minor early 20th century French composer.  None of these bagatelles presented technical challenges similar to those of the two preceding works, but they had an agreable charm, the faster movements very much indebted to bitonality  –  that never-failing gift from Stravinsky to his countrymen.  As well as mainstream material, Gugnin has recorded some recherche Russian material – Arno Babadjanian’s Six Pictures, for instance, alongside both Shostakovich piano concertos  –  but this set of Reminiscences comes pretty close to salon music, albeit a touch more spiky than the usual run.

To end his program, the pianist played the Trois mouvements de Petrouchka, Stravinsky’s 1921 deconstruction of his own ballet for the delectation of Arthur Rubinstein.  Here, Gugnin produced a remarkable demonstration of intelligent virtuosity, the Danse russe much more telling than the customary percussive battering-ram but packed with deftly articulated detail, the player keeping a constant weather-eye out for the occasional close-to-swamped melody.  Both this set of pages and the following Chez Petrouchka came close to ideal in this pianist’s vision, the outlines lucid with some remarkable vaults across the keyboard that helped to explain why this pianist had won quite a few international competitions before he landed in Sydney.

Gugnin made a fine start on the finale, La semaine grasse, notable for a shimmering ripple imitating the string texture that features at the opening to this scene.  The trouble with the piece is that there is too much; where the orchestra offers textural change in the original ballet, this re-imagining preserves too much of the lavish material from the original scene and the piano-writing winds up sounding heavy-handed.  Further, the conclusion to this and the later concert version has a crassness of imagination when compared to the brilliantly achieved conclusion of the actual ballet – an unanswered question that bemused Diaghilev.

By the time Gugnin reached the end of his Shrovetide Fair, I’d had enough and the recital had run well overtime.  However, it completed a highly informative event that let us hear at first-hand what the Sydney jury had seen in Gugnin that singled him out.  I have to confess that the performer’s appearance had me fooled; from the publicity shots, including the one reproduced above, he looks remarkably young  –  possibly a late teenager.   He is, in fact, 30 and has a physical stature that argues for familiarity with gym work.   In the end, apart from his physical presence, Gugnin is  an impressive figure to see at work and obviously has the requisite talent to further a career that is already packed with appearances cross the globe.