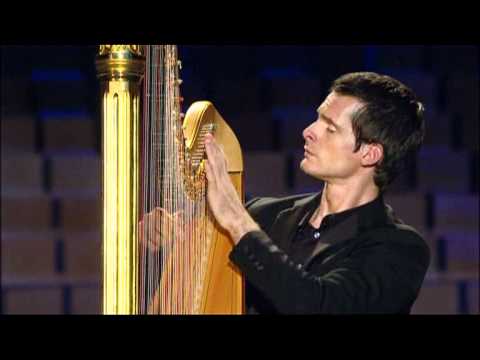 In one of the most publicized ABO events for some time, French harpist de Maistre gave lavishly of his talents in Boieldieu’s C Major (ostensibly) Concerto, following this with two transcriptions of well-known Spanish pieces and one of his signature offerings in an arrangement (I presume, his own) of Smetana’s Vltava – well, a good deal of it, although the Country Wedding  polka from bars 122 to 177 disappeared completely and certain parts of the river’s progress to Prague disappeared for the sake of some flashy cadenzas.

At the evening’s start, the players came onstage and for once, I thought, we would be spared the customary address from artistic director Paul Dyer.   Sadly, no; we were yet again subjected to a plethora of laudatory adjectives: two ‘spectaculars’, a ‘marvellous’, three ‘wonderfuls’, two ‘most beautifuls’ plus a ‘really beautiful’, a ‘most spectacular’, a ‘really incredible’, a ‘real treat’, a ‘gorgeous’ and a ‘most moving’.  It was hard to keep up with the flow and so I might have missed a few stray self-encomiums.

It was obviously going to be a night of superlatives  –  but then, it always is.  As for actual information as opposed to hyperbole, it was thin on the ground.  The soloist lives in Monaco with his wife and young daughter; he gets to see them for only a few months of his professionally active year.  Also, we would be hearing Ravel’s Pavane  pour une infante defunte on period instruments, ‘probably for the first time’ – and this was a notable experience because . . . ?  At all events, we were promised a sort of historical tour.  And we got one, although little of the changes were rung by the ABO itself.  Mozart’s Symphony No. 20 in D dated from 1772; C.P.E. Bach’s Symphony No. 1 was written in 1775-6; the harp concerto comes from 1800.  Granted, the Ravel scrap was composed in 1889 but its introduction to this program, given the ABO’s specified operational territory, was aberrational.

Unless my note-taking was a fault, Dyer had referred to Mozart in his opening address as ‘this little protege’, although of whom I am still in doubt.  Anyway, the performance featured Dyer accompanying his orchestra on the harpsichord which, for much of the time, was inaudible.  He might have expended his energies better in restraining the horns’ volume which drowned out the violin action for far too much of the energetic first Allegro.  Certainly, the work was played first-up but you might have expected better tuning from the oboes in a hall that was by no means cold.

The same problem arose in the Andante where the solo flute, doubling the first violins an octave higher, was marginally off-pitch.  Despite the verve in the string attack at its opening, the finale was weighed down by the emergence of the wind in bar 5, so much so that the presto speed that set up expectations was dragged back into more of a jog-trot.  Here again, the brass were over-encouraged;  God knows, their parts are simple enough, so there’s not much point in drawing attention to them by braying.

We also enjoyed a harpsichord continuo in the Boieldieu concerto; none of the four performances to which I have access use a keyboard, but let that pass.  De Maistre has great talent and a fine fluency, yet his outline of the first movement Allegro brillante impressed as wayward; on occasions, small passing notes didn’t sound in his instrument’s upper register, and both he and Dyer played around with the music’s metre, on occasions suggesting a practice of Chopinesque rubato that came into play a couple of decades down the chronological track.  This proved even more noticeable in the short Andante lento where the strings stuck to their last by employing no vibrato.  Both this middle segment and the attacca-linked Rondo finale were in C minor, the latter a fine sample of excellent interplay between soloist and orchestra with very few discrepancies at post-cadenza entries.

Matters hadn’t improved much for the oboes in the post-interval C.P.E. Bach work, a balancing compensation coming from a splendid crispness in the string attack on the work’s stop-start mode of address.  In fact, both groups of violins enjoyed the curt flamboyance of this work’s first movement which played itself along with minimal direction, although Dyer leaped up for an attention-grabbing gesture about 9 bars before the brief (26 bars) middle Largo began.  This hiatus gave fine exposure to the matched timbres of first flute Melissa Farrow doubling Monique O’Dea‘s lead viola, and second flute Mikaela Oberg in partnership with principal cellist Jamie Hey.

The concluding Presto also almost plays itself, with only two fermata points to stem the flow, both controlled with fair success by concertmaster Shaun Lee-Chen.  As with the concerto, this finale impressed as the work’s most convincing segment – for its innate energy, yes, but also for the interest generated by the performers’ approach to dynamics and the score’s appealing restlessness.

The Ravel Pavane begins with a horn solo – not hard to negotiate but uneven when performed on a period instrument using crooks.  Apart from this oddity, the reading sounded very much like that you might hear from any other chamber orchestra, although I can’t recall any clarinets.  You could have welcomed some more strings to give this placid piece some contrasting vitality in the middle G minor pages.  The fade-to-black at the end struck me as gauche, an unnecessary pictorialization of the dead infanta’s state of being (or non-being).

Enter de Maistre with his solo bracket.  He began with the Spanish Dance from Falla’s La vida breve (1904-5) which was brightened up with a clutch of passing glissandi and generally managed to transfer the infectious rhythmic contrasts of the orchestral original.  A guitar classic, Tarrega’s Recuerdos de la Alhambra (1896), produced the most intriguing music of the night from this artist with some feather-light tremolo work and a dangerously soft dynamic in some passages that had you holding your breath in admiration.

You could find much pleasure in sections of the Smetana tone poem (composed in 1874); in fact, the opening trickling up to the main theme’s initial exhaustion was very deftly handled.  De Maistre spiced up the score with some cadenza-like flurries and gave us a fine line in harmonics in the A flat nocturne at the work’s centre.  Still, you missed the excitement of the St. John’s Rapids section where the orchestra frets and fumes with gusto, while the glorious Vysehrad appearance near the work’s end was necessarily under-powered.  For all that, this was an impressive demonstration of technical skill and informed responsiveness to a marvellous sequence of musical depictions of landscape, made all the more remarkable when you have a look at the original’s wafer-thin harp part.