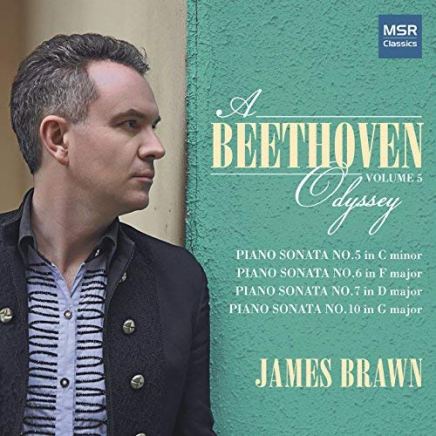 In this latest album, English-born Australian pianist Brawn has filled in a gap as he progresses through his cycle of the complete Beethoven sonatas.   In this instance, he presents four of the first period group, leaving only one of the first 10 sonatas unrecorded = the big No. 4 in E flat.   For many a piano student, this new CD will bring back both memories and nightmares, especially in this country where these particular sonatas featured for many years (and probably still do) on AMEB and Year 12 examination lists.   Still, such listeners will find much of interest in these interpretations in which Brawn exercises his perennial enthusiasm and talent in finding sensible solutions to practical problems.

His outline of the first movement to the C minor Sonata No. 5 offers a deft fusion of sharp-edged drama and sensible restraint when the tonality shifts to E flat. The argument – admittedly, not a particularly dense one – is allowed just the right amount of insistence with some nice moments of emphasis, as in the hair’s breadth hesitation before the arpeggio introducing bar 180 and the emphasis on the pseudo-Alberti bass quavers that run almost uninterrupted between bars 215 and 263.

The pianist’s approach to the central Adagio is – in a word – fluid.  Which is hardly surprising, considering the alarums and excursions that the movement contains, although like many a pianist before him, Brawn makes a moving metrical feast of the middle strophes, reverting to adagio molto at bar 71 after an action-packed central venture into excitement before coming back to a home key placidity.  Possibly the coda could have been handled with less urgency to get to the end, although it’s true that there isn’t much matter here that makes you want to linger.

With the Prestissimo finale, Brawn shows the same exemplary brio as in the bounding first movement, the pages urged past with creditable clarity at spots like bars 34-35 where the tendency is to hammer out the right-hand oscillating octave semiquavers to the disadvantage of the left hand’s descending scale.  A rare inexplicable point comes in the centre of bar 68 where a minute change-of-gear interrupts the precipitate urgency.  And Brawn cannot resist the temptation to indulge in the slightest of ritardandi in the second-last bar.

An impressive agitation enriches the opening to the following F Major Sonata, the exposition treated as a very vital allegro indeed   A solitary question mark hangs over bar 72 where the switch from triplets back to straight semiquavers, compounded by a mordent, seems laboured.   But the movement simmers with plenty of panache and a forward thrust, notably at the reversion to the home key after a D Major interlude/lead-in.   Brawn then produces an exemplary rendition of the following Allegretto, a minuet and trio that seems to me more like a spectral landler in its outer segments, here firmly controlled and  well-shaped in its delineation of the composer’s right-hand counterpoint at the minuet’s return.

As for the Presto conclusion to this work, it rattles through persuasively, realizing the composer’s attempted gaiety well enough even if the humour is inclined to be heavy-handed in the movement’s second ‘half’ from about bar 41; it’s a relief to get out of the canons and back to the D Major lightness of bar 69.   However, the passage in question is handled with a good deal more aplomb in the repeat.   Further, the inner-part detail in the final segment from bar 125 onwards is exceptionally polished.

Third in the Op. 10 triptych dedicated to the Countess von Browne, the Sonata No. 7 in D Major has four movements of markedly varied temper, including a D minor Largo e mesto of splendid theatricality which is also the longest track on this CD.   Brawn enters without reserve into the energetic world of the initial Presto; this is a highly persuasive reading, observant of the usual dynamic markings and packed with buoyant spirit.  Throughout the development, tension seems to rise without letting up – on both Beethoven’s and Brawn’s parts – until the emphatic and jubilantly rattling last bars.

One of my acquaintances in student days chose piano as his second study and this sonata’s Lento as one of his end-of-year ‘list’.   It was the first time I had paid any attention to these pages in any detail, coerced on this occasion as he wanted help.   After its sweeping tapestry had been enjoyed a few times, the detail in each section came into focus, the pages merging into a compelling and moving entity.  In this interpretation, you miss the concert hall’s majestic echo but the recording’s clarity ensures that you miss nothing in the pianist’s efforts to enunciate each chord’s full complement and the samples of pre-Chopin delicacy or Bachian meanderings (Italian Concerto, second movement) shown in bars 36 to 42; then later, after the climactic welter is finished, at bar 72.

The Minuet‘s attractive ambling pace makes a fine consequent to the Lento‘s tragedy and is notable for its precision, even down to features that tend to be subsumed into the recording ether in other recordings, like the left hand sforzando in bar 31.  But the best, like at Cana, is saved till last with a Rondo finale where pretty much everything comes together successfully, from the near-curt definition of the initial three-note theme, through the action-packed modulation-rich episodes, to the inexorable fluency of the final 8 bars where Brawn caps the whole sonata with a conclusion both convincing and elegant.

The CD ends with the G Major Sonata No. 10, a fine summation of achievement on Beethoven’s part and an excellent instance of Brawn’s talent for outlining whole paragraphs so as to conserve their integrity, a gift particularly evident in the opening Allegro‘s consistency of narrative between the exposition and recapitulation even though the latter is handled with more rhythmic freedom, if not actual quirkiness.  Further, the flurries of demi-semiquavers run past without a hint of martellato flashiness but come over as natural flourishes to close off a particular paragraph.

With the central Andante theme and three variations, you find it hard to quibble with anything.   Block chords are impressively clear and despatched without even a suggestion of arpeggiation.   Everywhere you look are signs of precise preparation, even in details like the triplet left-hand run that concludes bar 52 leading into a delicious, unexpected piano; or the differentiation between piano and pianissimo in the trademark staccato chords from bar 85 to bar 88.  The following Scherzo is almost as impressive, not least for the performer’s abstinence in use of the sustaining pedal and a consequent transparency of texture; not so much in the C Major interlude/trio that starts at bar 73, but more remarkably in the near-final pages featuring the left-hand-over frivolity that sounds effortless even though the chances of error in such cross-hand passages are ever-present.

Brawn’s odyssey-saga will continue with a sixth album due to be recorded by the end of the year but this current release leaves us with much rewarding listening.  The acoustic conditions that apply at Brawn’s recording studio in Potton Hall, Suffolk continue to underline his style of delivery, most suitable in these earlier and more intimate works which reveal Beethoven’s energy and delight in his own creativity throughout most of the four sonatas.  Brawn’s interpretations reveal a true personality at work, one that finds a coherent path and stays on it without getting bogged down in glutinous gravity.