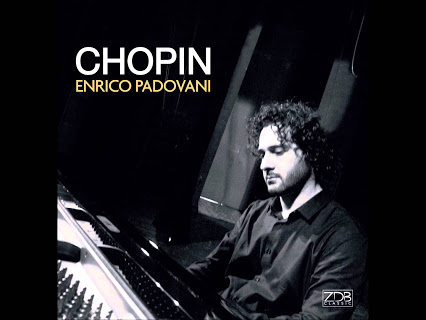 A native son of Parma,  educated in that city and Florence, Enrico Padovani has cut a swathe through the various competitions for piano in his native land – Fusignano, Racconigi, Pistoia, Piombino, Riccione, Padova, Moncalieri – winning prizes as both soloist and chamber musician.  Approaching the middle years of his career, Padovani – teacher and performer – has issued this sample of his considerable talents entering a particularly crowded field; most of the works performed on this CD have been recorded times beyond count by musicians of superb, transcendent insight as well as by players who over-estimated their own abilities.

It’s hard to think of a composer whose works have been the subject of so much brilliantly incisive scholarship and investigation for its own sake.  Chopin remains the ne plus ultra for many pianists, his works presenting challenges in their own right as well as in the light of recorded performances by high-profile executants.  Even these days, 165 years after the master’s death, players of all nationalities and abilities grapple with works that range from the near-unplayable to the deceptively simple and straightforward.  As well, Chopin is one of the few composers to have an international competition  – one of the most searching (and often controversial) on the European stage – held in his honour.

Padovani’s choice of material shows a bracing response to the Chopin challenge.  You don’t find the all-too-familiar pieces in this 11-track offering.  The stand-alone popular works – Berceuse, Barcarolle, Fantaisie-Impromptu, D flat Etude, E flat Nocturne – are absent as Padovani goes for the jugular with the Sonata No. 3 in B minor, the four Opus 17 Mazurkas, the non-flamboyant C minor Polonaise and the posthumous Waltz No. 19 in A minor. His only gesture to the well-known comes courtesy of the B flat minor Scherzo No. 2.

The sonata takes pride of place and Padovani approaches it with a firm grasp of its confrontational nature.  Unlike many of his peers, he repeats the first movement’s exposition in a fluent exhibition of technique with a deft mixture of discipline and rubato in the interpretation’s metrical progress.  The development sounds over-muscular, the texture pretty thick; but then, this segment of the work is probably the most problematic and disappointing for any executant, let alone a dispassionate analyst of the movement itself.  In the following Scherzo, for once the actual rhythm is clearly articulated, not the usual meaningless run of catch-as-catch-can quavers meant to dazzle with legerdemain while at the same time puzzling for a lack of structural sense.  Just as impressive in musically informed terms is the movement’s Trio, where the middle voices emerge with appreciable clarity.

It would be hard to cavil at the B Major Largo that opens in brusque majesty, only to fall back into a finely spun melodic paragraph.  As with the preceding movement, Padovani makes several individual strokes in the central section where his use of rubato is both pronounced and well-positioned.  He also shows an enviable tenth-embracing left hand stretch just before the turn back to the movement’s home key.  With the Finale/Presto, this interpretation gives pride of place to the left hand in those places where the right has sequences of downward-rushing scales, an emphasis that robs these pages of some much-needed lightness of texture.  Still, the final blaze into B Major is both well-accomplished and exciting to experience.

Few of the near-60 mazurkas ring recognition bells with the public, except for the early B flat Op.7 and the two used in Fokine’s Les Sylphides ballet. This Op. 17 set are fairly obscure, only the first favoured by many pianists, but none of them is technically challenging to negotiate.  Padovani begins the first B flat piece with a definite rhythmic impetus, albeit restrained in its dynamic contrasts.  The following E minor work succeeds much more pleasingly with a sensitive amalgam of strength and fragility, the left hand drones sustaining a finely-honed melody line that gradually shrinks into itself.  Pick of the set is the ambivalent No. 3 in A flat, Padovani investing its two pages with excellent shapeliness of phrase and sensitive variety of touch: an outstandingly sensible, and coherent interpretation.  The last of the sequence, Lento ma non troppo, shows an individualistic approach with the tempo direction’s last three words informing the chosen pace.  Here is not the mournfully languid meander that many other pianists make of it but a much more insistent creature; its inner propulsion both unnerving and somehow just right as a no-nonsense patina-stripping exercise.

The most sombre of the polonaises, the C minor of Op. 40, holds few moments of virtuosic excitement, unlike its Military A Major companion.  Padovani underplays the work’s tragic connotations, taking a very aggressive approach with the left-hand octave melody-line and giving us little consolation in the A flat Trio where Chopin inserts some actual polonaise rhythmic gestures; here, these passages are given sotto voce before the muffled call to arms makes its re-appearance.  In sum, this is a striking example of how to look with fresh eyes at pages that have been typecast in solid ambient gloom for far too long.

The Scherzo finds the executant using his sustaining pedal to create sound-washes, sometimes effectively, at other stages over-painting the harmonic welter. The work comes to a powerful, dramatic conclusion but the right-hand descending figure that dominates the main theme’s second strophe is often articulated oddly; its notes are all there, but they register unevenly, some weightier in impact than others.  It might be an essay in internal diminuendo each time but the effect is ungainly – a rare disappointment.

Finally, Padovani provides his own encore with the small-scale waltz, a mini-essay in delicacy and the least difficult piece on the CD.  For all that, it makes for an ideal rounding-off after all the preceding pounding vitality, as the pianist gives it a clear-speaking integrity of phrase through a muted dynamic palette that speaks volumes for his powers of musicianship and sensitivity.

He might not be the most eminent name among current Chopin interpreters but Padovani shows us through his enterprise in producing this CD how many-sided, how protean is the Polish composer’s genius, achieving this end with devotion and indubitable craft.